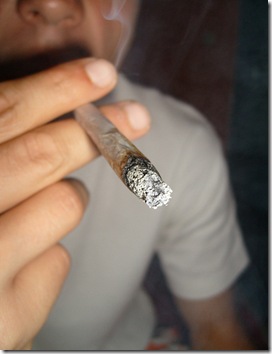 In May 2005, legal pot smoker Steve Gibson was asked to leave the premises of Gator Ted’s restaurant in Burlington Ontario.

Since then, Gator Ted’s owner Ted Kindos has been battling Gibson; mounting tens of thousands of dollars in court legal bills with his business on the line.

Gibson received a medical certificate to smoke marijuana in 2004 to help ease the neck pain he experiences as a result of a 1989 accident that occurred at his job in Mississauga. Gibson has been living off a disability pension since.

After the confrontation in 2005, Gibson went to the Ontario Human Rights Commission, claiming he was discriminated against because of his disability. Gibson won against bar owner Kindos, who was only acting on complaints from his patrons.

Kindos was prepared to settle the dispute and pay Gibson for “pain and suffering”. In the agreement, he was also obligated to train his staff on human rights code and post signs in his restaurant to show his customers that legal marijuana users are welcome.

It wasn’t until the Alcohol and Gaming Commission of Ontario warned Kindos that serving a patron who possesses a “controlled substance” is a violation of the liquor license act that Kindos decided to fight back.

As stipulated in the Ontario Liquor License Act as a condition of liquor sale licenses in section 45:

“The licence holder shall not permit a person to hold, offer for sale, sell, distribute or consume a controlled substance as defined in the Controlled Drugs and Substances Act (Canada) on the premises or in the adjacent washrooms, liquor and food preparation areas and storage areas under the exclusive control of the licence holder. R.R.O. 1990, Reg. 719, s. 45 (2); O. Reg. 247/02, s. 17; O. Reg. 24/04, s. 1.”

Kindos and Gibson are  now scheduled to go back to the Ontario Human Rights Commission in a series of hearings that start on June 8th.

Kindos is looking to settle the dispute without being forced to violate the liquor license act and Gibson just wants to be treated like a regular cigarette smoker.

Did common sense just go up in smoke?

Is this really a violation of Gibson’s rights? Don’t regular patrons who pass through the front door have a right to not be exposed to marijuana smoke as well?

Doesn’t Kindos have a right to decide what’s best for 99% of his patrons?

At the end of the day, Gibson just wants to be treated like any other smoker. That’s why he’s fighting this, right?

We can only take his word that this is the case and that he’s not fighting Kindos for the $20,000 settlement that he was originally asking for.

Surely this can’t be about money, can it?

Couldn’t Kindos move the “regular” smoker section further away from the door and then allow Gibson to join the regular smokers?

When I asked Kindos whether he considered this option, the Gator Ted’s “Webmaster” (who has intimate knowledge about the case) told me that this wasn’t a feasible option given there’s a grocery store to the left, another restaurant to the right, and a parking lot out front.

In a complicated world where drivers are battling cyclists for the roadways and Hollywood stars are battling news agencies for twitter followers, this marijuana story seems so trivial.

But one man’s neck pain is another man’s pain in the neck, and this one will be settled in the courts.