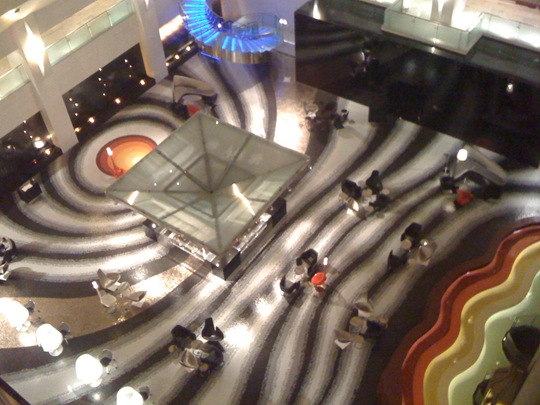 Editor’s Note: Kimi Sokhi is a Toronto resident and IT Consultant who is currently on a 3-month work leave living with family in Dubai. She’s currently traveling in India and shared her thoughts with the Urban Country via e-mail about her visit to New Delhi, India.

We landed at Indira Gandhi International Airport at 4 am on July 7th. My first impression was “Wow! I haven’t been hit in the face and overcome by ‘The Smell’ as we walk off the plane”. You see in the past I have always been hit by ‘The Smell’ (particularly in the summer) which is at the heart of the Indian Experience. ‘The Smell’ is a combination of dust, pollution, dirt, garbage and human excretions.

Moving on; we walked into the terminal (sans ‘The Smell’) and we were surprised to see how clean it was. No garbage, white walls, clean floors. My mom chimed in “they renovated the airport a few years ago and now they are adding a brand new terminal”. Cool! Leaving aside the mass chaos that ensued due to the Swine Flu screening, the experience at the airport was a welcome and pleasant surprise.

Infrastructure and the Environment

As we drove home at the crack of dawn, we were in for our second surprise: The sky was blue. There was no smog. Five years ago New Delhi was second only to Cairo for the worst air quality in the world. Between 2000-2005, the pollution due to automotive emissions was at an all time high. There was a massive increase in cases of lung disease and face masks had become part of the Delhi-ite’s everyday garb. In the past few years the government has put in place more stringent emissions standards for all vehicles.

All public transit vehicles are being converted to run on Compressed Natural Gas (CNG). Many privately owned cars also run on CNG. ALL three-wheeler auto rickshaws and taxis run on natural gas. Around 50% of the old buses have been phased out and replaced by the new buses. In fact, Delhi already has the world’s largest fleet of CNG vehicles. Don’t get me wrong, I am sure Delhi is still one of the worst cities in terms of air quality but the difference we felt was plainly obvious. There is no visible smog. None of us are coughing like we normally do when we get here. Check out the local government’s efforts to make the city pollution-free by the 2010 Commonwealth Games.

Delhi has also built a new Metro system that connects this massive city of 18 million residents and its satellite towns. I have been on the Metro a few times and I can attest to the fact that it is one of the cleanest and most organized public transit systems around. It beats the (Toronto) TTC hollow. It is shocking that it is as clean as it is. India does not have the best track record of maintaining public property. However, the citizens of Delhi take such pride in this transit system that they are committed to keeping it clean and functional. Makes me proud to be an Indian 🙂

After my first day of shopping and bargain hunting, it has become plainly obvious that India is experiencing a growth spurt like never before. The hoards of young professionals dressed in the latest western fashions, packed into hip coffee joints confirms the fact that India is a growing economy. It is one of the handful of countries that has not been affected by the recent worldwide recession. What warms my heart is that even though India is moving forward and embracing modernization, it has not forgotten its roots and culture. It is still a place where the young respect their elders, where guests are considered a gift from God (and treated as such!) and where Cricket and Bollywood are the two favorite national pastimes (obsessions!).

India has managed to maintain its cottage industries and also put up malls that have designer stores. In fact, close to my uncle’s house are two malls that have only the most exclusive designer brands. With such a huge population, there is a market for everything. Louis Vutton and the export surplus stores are available in the same strip mall. Street food vendors and Pizza Hut are both doing roaring business.

How to Bargain in India:

Last night I saw my mom in full-blown bargaining action: The storekeeper was asking for 450 Rupees for one shirt and 480 for the other (that’s $22 CAD). So he was willing to give both the shirts for R/- 900.

My mom: ‘no way, R/- 500 is my last offer‘. They argued back and forth for about 40 seconds stating how ridiculous and unrealistic the other one was being. ‘

The man screamed:  ‘what do you think my margin is lady? I also have to make a living’ etc etc.

Super mom: ‘R/- 600 is my last and final offer’ and we both walk away. (I know when to walk away instinctively since I have grown up seeing this happen on almost a daily basis when we lived in India).

That’s how you do it people. Here are some quick tips in case you happen to be in a bargaining war with a stubborn shopkeeper in India: