Living Off the Grid 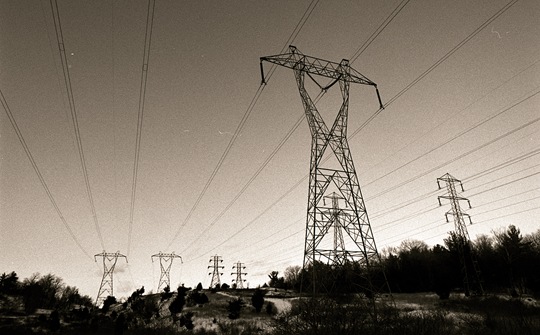 What do a solar backpack, a wind up lantern, a pedal-pump generator, and a rollable water-proof solar panel have in common? Firstly, they all provide sustainable energy “off the grid”, and secondly, they can all be purchased from a really neat website called Modern Outpost that I recently stumbled across. Modern Outpost “specializes in self-reliant power technology for people who live, work & play in the great outdoors”. They are based out of Courtenay, BC and they have been in business for over 10 years, with a very focused line of products that relate to sustainable energy.

I’ve been fascinated with self-reliant energy for as long as I can remember, but I became truly passionate about it last year when recent technological advancements made self-reliant energy a more viable option in the future. In an Urban Country article last December I profiled a Freeplay LED wind-up lantern that I purchased from Mountain Equipment Co-op and I discussed a rock band called the Ginger Ninjas that was touring completely “off the grid” by generating electricity on their bicycles while they rode from city-to-city.

So when I stumbled upon Modern Outpost, a website that deals almost exclusively with sustainable energy creation, I was naturally excited and giddy. But what really makes the Modern Outpost stand out is that they test all of the products that they sell and they provide their own words to explain how the product works, how you should use it, and what sort of actual performance you should expect from that product.

A perfect example is an article where Modern Outpost describes how to choose a solar panel for your canoe or kayak. They walk you through all of the decisions you need to make, how to estimate your power needs, what sort of wattage output to expect from the solar panels, and which battery pack you should purchase to store the power generated by the solar panel.

I’ve recently been toying around with a future business idea / eco-social experiment where I would purchase a piece of land in a remote area on a lake and I would build sustainable cabins on the property that are completely off the grid, but still provide some of the basic luxuries that most people expect as the “norm” in today’s society. These cabins would be rented out for eco-conscious people who are looking to escape the city but want to minimize their energy usage. Each cabin would have access to a canoe and/or kayak to take out on the lake that would (hopefully) be free of gas-powered boats.

If this plan comes to fruition some day I would profile the progress in a series of articles to showcase the benefits and hurdles in building a sustainable home. In an article in March 2008 I profiled a house in Toronto that was built in 1996 by inventor Rolph Paloheimo to be self-sustaining home with a 2,700 watt solar panel system built on the roof.

Paloheimo was ahead of his time when he built his home in 1996, but a trend is beginning as we speak with people becoming more aware and conscious about the harm we’re causing to the earth. I wouldn’t be surprised if more people build “off-the-grid” homes in the next 5-10 years as the environmental movement unfolds.

I just finished reading Malcolm Gladwell’s Tipping Point where he talks about how a product gains traction before “tipping” and becoming successful. Earlier today I pondered when the environmental movement would “tip”. It’s only a matter of time before it happens, and the prospect of an environmental “tipping point” is what keeps me driven every single day.

Check back in to the Urban Country for a review of the 7 watt solar panel I purchased to charge my GPS, phone, camera and MP3 player during my Toronto to Montreal kayak trip this summer.