Back to the Mothership: Punjab (Part II) 8 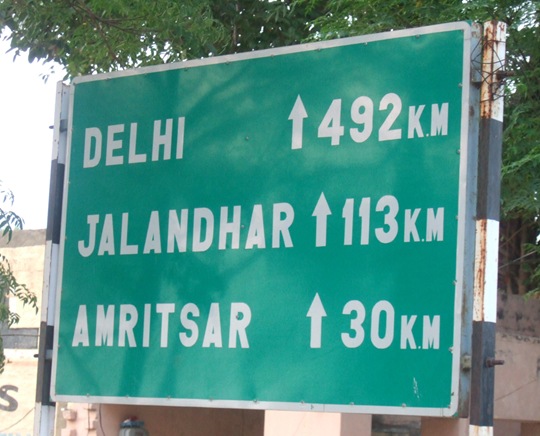 The second half of our journey in Punjab was primarily gastronomic in nature. Amritsar is famous for its food, especially it’s Dhabas (check out ‘The Dhabas of Amritsar’). My dad is a total foodie and having lived in Punjab early on in his career, he knows a lot of local joints. We stopped by at Bharawan da Dhaba, one of his favourite eateries in Amritsar. He claimed that they had the world’s best tandoori parathas. Now that’s quite a claim! Before we proceed further into the world of tandoori parathas, here is the official definition of a paratha (from Wikipedia):

Paratha is an Indian flat-bread that originated in the Indian subcontinent. Paratha is an amalgamation of the words parat and atta which literally means layers of cooked flour. It is one of the most popular unleavened flat-breads in Indian cuisine and is made by pan frying whole-wheat flour on a tava.The paratha dough usually contains ghee or cooking oil which is also layered on the freshly prepared paratha.

Parathas come in two varieties: plain or stuffed. Plain parathas are a staple in Indian meals. In fact, they are a meal by themselves with their delicious layers of flour and desi ghee and dollops of white butter (the color butter is supposed to be people!) dropped on top. But why just have a plain paratha when you can stuff it with even more food? The stuffings range from potatoes (a Sunday brunch fav in our household) to radishes, cauliflower or paneer (Indian cottage cheese). The Paratha’s best side kicks are a blob of butter spread on top, pickles and yogurt. Tandoori paranthas (recipe here) are like the king of parathas. They are stuffed with the best ingredients and cooked in a special clay oven called a ‘Tandoor’ from which all tandoori dishes in the Indian subcontinent and the middle east get their name. Food cooked in the clay oven has this amazing earthy aroma and an unparalleled taste. Tasting is believing. Tip: try to find an Indian restaurant in your city that has an authentic Tandoor oven in their kitchen. You won’t regret it! 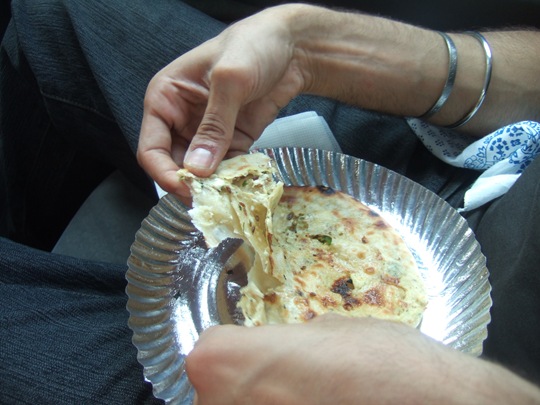 As I write this, my mouth is watering like a young puppy who has spotted salami. We walked into a packed Bharawan da Dhaba. The place was bustling with locals, tourists and NRI’s (Non-resident Indian’s) like us who had come to taste Punjabi cuisine the way it is meant to be: flavorful, hearty, scrumptious and rich. I think it was at this moment during my trip that I completely let go of my health consciousness and trashed my diet as soon as I walked into the door. And boy did I let go. We pounded back the best parathas I have ever had in my life. Period. I can still sort of taste them if I try. We all had one paneer (cheese) and one potato paratha. It was a religious experience in the religious city of Amritsar 🙂

After Amritsar, we drove to the Wagah Border which straddles India and Pakistan and is known as the Berlin Wall of Asia. Each day before sunset troops from both sides put on a spectacular show of might and contempt all for the sake of entertainment. Hundreds of tourists from both sides show up everyday to witness the Border Closing ceremony. Each country blared patriotic songs and the crowd chants Hindustan Zindabad! (Long Live India) or Pakistan Zindabad! (Long Live Pakistan) and so on. We sat in the VIP section thanks to some connections my dad had in the Border Security Force and were lucky enough to witness the ceremony from up close. The chanting, yelling and singing reached a crescendo. The atmosphere was charged with patriotism from both sides as the ceremony commenced. The tallest and strongest young men from both countries marched forward vigorously with their feet almost reaching their foreheads. With contempt in their eyes and pride in their hearts they lowered their respective flags. Even as the ceremony came to a close, the crowd never stopped screaming. I don’t think any of us had screamed this hard in a very long time. My mom pretty much lost her voice that night.

It is amazing how these two countries share the same roots and yet have fought several wars. They were one country at some point. Punjab especially has so much in common with its neighbors on the Pakistani side: language, food, clothing. Political games and religious divisions can make people forget their commonalities and selectively remember the differences. Yet, if you look carefully, there really is no difference between ‘us’ and ‘them’, whoever the ‘them’ might be. People everywhere want to earn an honest living, raise a family and secure their children’s future. Is that really so hard to comprehend?

Too heavy? 🙂 I think it’s time for me to get back to the food!

Our last night in Punjab was perhaps the most memorable. We went to a traditional Punjabi village themed resort called Rangla Punjab. It comprises of traditional clay/mud huts, water wells and narrow alley ways. It is like a living museum with actors in huts performing their daily chores as people would in a real Punjabi village. As you step into a hut you may see a lady doing needlework or the village shoemaker mending shoes. Tucked away in another corner might be a housewife churning milk to make butter. And look over there! It’s the goldsmith’s shop and the village potter making a clay pot. Walking through the alleys of Rangla Punjab was a treat. It was like a treasure hunt when you don’t know what you may find around the corner. I felt like a child exploring a playground I had just stumbled upon. The village also has live performances of traditional Punjabi songs and dances each night. We caught the tail end of it, but it was very professionally done and thoroughly entertaining. 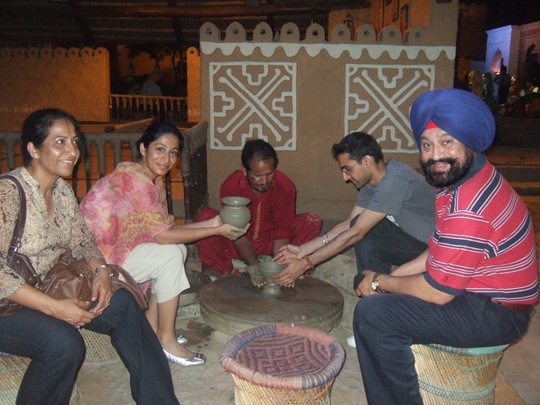 The highlight of the evening was our meal at the restaurant in the resort that is included with your entry ticket. The restaurant is set up like a traditional Punjabi dining room with low chairs and tables and traditionally dressed waiters. The meal is vegetarian but trust me that even the most hardcore meat eaters will not complain about the food here. Food is served in traditional copper, steel and clay goblets and plates. The waiters actually force you to eat more and more, along the lines of Punjabi customs. They hate taking no for an answer. Just like most Indian women, they think ‘No’ means two more scoops of chick peas and a generous helping of Daal. Each guest gets a massive plate of food with a plethora of ‘sabjis’ or dishes. Everything ranging from the traditional Maa di Daal (lentils) to Mattar Paneer (cheese and peas) was served. The food was finger licking delicious and it got even better after the waiters came around with Desi Ghee and added it a dollop to some of the dishes (Don’t think about the fat! Don’t think about the fat!). The meal was perfectly complemented with tandoori rotis, naans, pickles, yogurt, green chillies and the ultimate indulgence: Laasi (yogurt drink). Nothing beats laasi to wash down a meal. And this isn’t your fake westernized mango laasi, which is more like a milk shake than a laasi. No sir! This is the laasi made with the right spices like cumin and pepper and blended just right. We ended our meal on the perfect note: Ras Malai, sweet dumplings made from cottage cheese soaked (drowned) in sweetened, clotted cream. mmmmmmmm. What a memorable night to complete our adventures in Punjab!

Our visit to Punjab was like a Bollywood movie. It had a bit of everything: adventure, spirituality, emotions, family bonding, delicious food and most of all: great memories. Check out all the pictures here. I have a ton of videos too that I had trouble uploading but I hope to have them all up on YouTube soon.

All photos by Kimi Sokhi – Visit to Punjab 2009

8 thoughts on “Back to the Mothership: Punjab (Part II)”