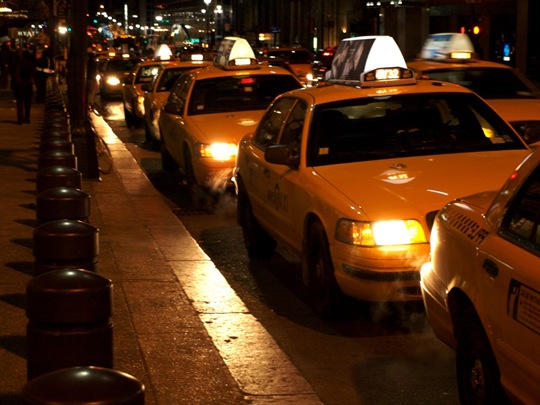 The year is 1969. Yasser Arafat is appointed the leader of the PLO, Apollo 11 lands on the moon, the Concorde jet breaks the sound barrier and 500,000 hippies congregate on Max Yasgur’s dairy farm in New York.

While all of this was happening, a father somewhere was teaching his son how to drive:

“Now listen here son. I reckon some day you’re going to be the best damn driver this town has ever seen – just like your pops. Now if there’s something you should know about driving, it’s this. Don’t turn your car off if you don’t need to. It takes more gas to start the car than to let it idle. So next time you’re at the store buying your old pops a pack of Camels, just let the car idle instead of shutting it off. You got that now son?”

Fast-forward 40 years. It’s 2009 and somehow the flawed logic that perhaps applied 40 years ago still persists even to this day. People still believe that they need to idle their car for 2, 5 and sometimes 10 minutes at a time – I still see it every day.

The only fathomable excuse that has any sort of possible validity is the harsh winter weather conditions – but even this excuse warrants some level of scrutiny except on the coldest of days.

It’s commonly accepted by automobile experts that idling a car that was built in the last 30 years for more than 10 seconds uses more gas than turning it off and starting it again.

There are few other forms of unnecessary pollution than that of idling an automobile. This isn’t anything new – it’s actually quite embarrassing that I’m writing an article in 2009 to explain something that should have been common knowledge for more than 2 decades – which is why I think it’s inexcusable to idle a car unnecessarily.

Drive-thru coffee shops are a hotbed for this breed of drivers. Here in Canada, a moderately successful Tim Horton’s coffee shop will see long lineups of cars persistently throughout the entire morning.

Little do these “idlers” realize that in most cases they could get out of their car, walk into the coffee shop and get back into their car before even reaching the drive-thru window.

An idling engine burns about 3.5 litres of gasoline each hour and idling engines emit almost double the amount of toxic emissions than a moving vehicle. Furthermore, warming up your car by idling is another myth that also hasn’t been relevant in decades either.

Many cities have had idling by-laws for many years – Toronto first adopted its idling By-law in 1996. Although a long list of exceptions were amended to the By-law in 1999, drive-thru restaurants were not included – so the police could theoretically hand out fines for people in long drive-thru lineups if their idling time exceeded 3 minutes.

I’m begging people out there to have some respect for the world and your neighbours and think twice before sitting out front of the grocery store idling your car for 10 minutes.

If the taxi drivers in Toronto can consistently comply, then it can’t be so hard for everyone else to resist the urge to idle.