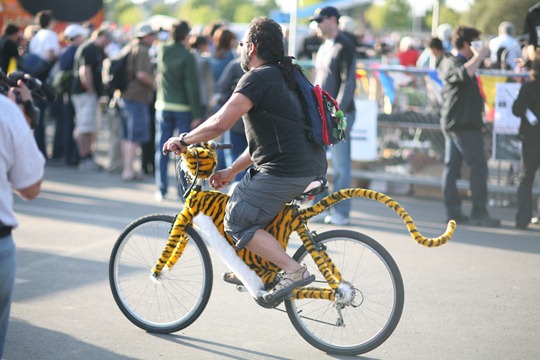 I can hardly believe that another decade has now ended – how fast time passes. We are now in 2010 – the year of the Tiger (officially beginning on Chinese New Year – February 14th, 2010)

Tigers do not find worth in power or money. They will be completely honest about how they feel and expect the same of you. On the other hand, they seek approval from peers and family. Generally, because of their charming personalities Tigers are well liked. Often, failing at a given task or being unproductive in his personal or professional life can cause a Tiger to experience a depression. Criticism from loved ones can also generate this type of Tiger reaction. Still, like all felines, Tigers always land on their feet, ready for their next act in life, pursuing it with unyielding energy and hunting it infallibly.

2009 was a great year for raising cycling awareness around the world. A wave of enthusiasm toward cycling has materialized and several European cycling advocacy websites have gained much popularity as several countries look to the Netherlands and Denmark for guidance on improving the state of cycling at home.

Early in December we highlighted Mikael Colville-Andersen – the man behind Copenhagen Cycle Chic and Copenhagenize.com. I also wanted to point out one of my favourite cycling advocacy websites – David Hembrow’s “A View from the Cycle Path”. David illustrates how cycling can become the primary method of transportation with proper investments in bicycle infrastructure. Even on New Years Day, Mr. Hembrow was out on his bicycle in the snow in Assen, Netherlands where he lives.

Some readers have perhaps been wondering why this website has been focusing so much on utility cycling lately. The answer is simply that I believe utility cycling is a simple way to substantially contribute to solving many world issues – including the following:

Here are a few of the many accomplishments we have seen in 2009 with respect to utility cycling:

I only have one New Year’s resolution this year and it is to focus more on promoting cycling through articles, videos, and organized rides/events.

And my vision for 2010? I would like 2010 to be known as the “Year of the bicycle” – with a long list of accomplishments in utility cycling. Then again the following year, and again.. and again.