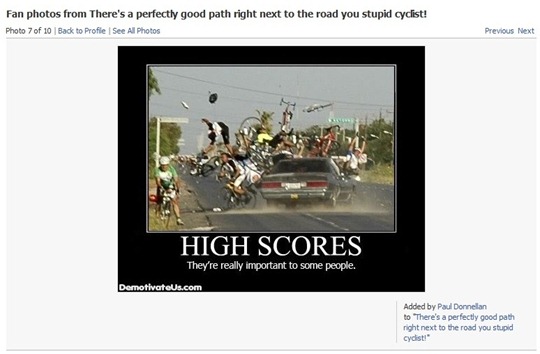 Today I stumbled across a Facebook page entitled “There’s a perfectly good path right next to the road you stupid cyclist”. Cyclist hate groups on Facebook are common, but this one in particular is more distasteful than others I have come across because it boasts more than 31,000 fans, and it in no uncertain terms explicitly promotes the murder of cyclists for simply being on the road.

The description for the group reads:

No matter how far to the left you are, you’re taking up my road.
My car is hard, and i am not slowing down!

Status updates include messages such as “saw a cyclist stack it today!” (Nov 29th), with 396 people who like it, and 116 comments, including the following:

Ashley Gibson – cyclists suck balls n if i ever hit one i will have no sypathy for them. fukn pilow byters!

The discussions page also contains some interesting exchanges between the cyclists and the anti-cyclists – including this note from one Adam Fry:

“Geoff, if you and 9 other cyclists were occupying the lane in front of a truck driver, let’s just say I would have no qualms in watching said truck driver run you all down, ok? That kind of behaviour may be ILLEGAL on the driver’s part, but it would serve you all right for being so OBNOXIOUS and believing you have any right of way to prevent motor-vehicles from occupying that space. Secondly, if you are driving in the right lane it is only to turn or to overtake. If you cannot overtake in an applicable time-frame, then you most probably will be yelled at by the person behind you. We don’t all work on your time-frame, some people are in a hurry. So please, stop being so OBNOXIUS and don’t attempt to tell other users to “chill a bit” unless you plan to do so yourself.” 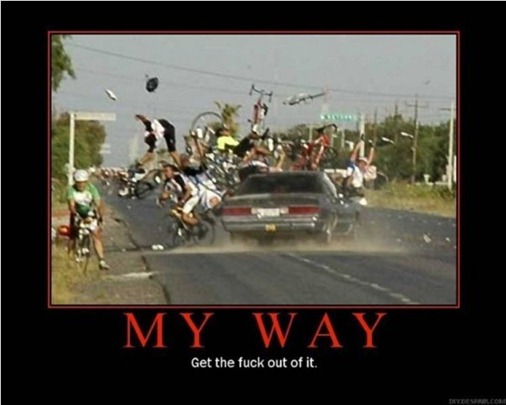 I have reported this group to Facebook, as I’m sure many others have done as well. I would encourage you to report this group as well for its hatred and threatening content. The “Report Page” link resides on the bottom left side of the group page.

Here is the note I included in my report:

Please shut down this hate group immediately. This group violates section 3-7 in the Facebook Statement of Rights and Responsibilities by containing hateful content, threatening messages and photos and it contains graphic or gratuitous violence.

It contains inappropriate photos and comments that promote the murder of cyclists.

Other Facebook hate groups include “I hate buses”, “I hate cyclists that use the road but abuse the rules!”, “The People Against Sucky Ass Drivers”, “I hate women drivers” among others.

I do believe in free speech, and people have the right to complain about cyclists. But explicitly condoning the murder of cyclists crosses the line. If enough people report this group, Facebook will shut it down.