Reasons NOT to Buy an iPad 5 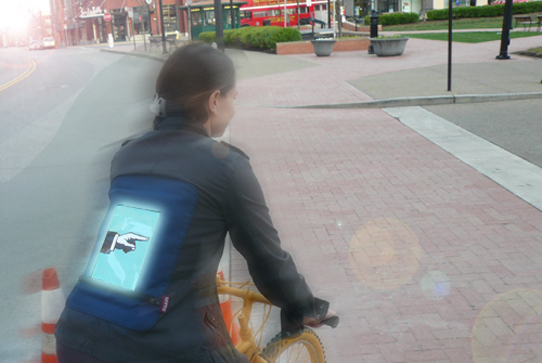 After avoiding all the iPad hype since its release on April 3rd, I felt it necessary to at least comment on the latest iPad “app” (if you can even call it an app).

In an effort to find useful real-world applications for the all-new iPad, a company called Maya has developed an application to allow cyclists to communicate their signals by strapping a $500+ iPad to their back while riding a bike.

At least the designers of the application admit that this is a “silly example of having fun with an iPad”. Wired.com seemed to take this ridiculous contraption seriously in its article on April 16th which led to 30,000 video views on that day alone.

Maya refers to this usage of the iPad as an example of “precycling”, whereby you find a useful purpose for the device for when it becomes worthless – and because they claim the iPad will only be worth $50 in two years, this is an example of something the “worthless” iPad could do.

This illustrates one of the reasons I will probably never buy an Apple product – the notion that you need to buy the latest Apple product every year if you want to be cool. It reminds me of the automobile industry where they convince consumers that for some reason they need to purchase a new automobile every 2 years – it’s completely ludicrous to think you need a new car every two years.

Corporations have become so greedy (and smart), because they have convinced the masses that they need to perpetually consume their products every year or two if they want to “keep up with the Joneses”.

(At least Apple has Moore’s law as an excuse for perpetual consumption – the auto manufacturers only have greed and bankruptcy as excuses).

Maya also provides a list of other hair-brained ideas that people suggested for the iPad:

This just about sums up the reasons why you won’t see me buying an iPad anytime soon.

5 thoughts on “Reasons NOT to Buy an iPad”