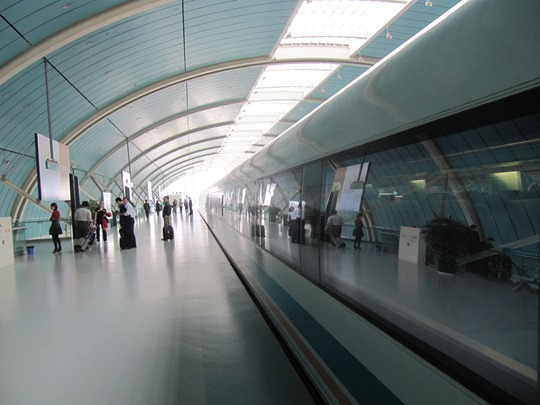 Photos and video by James D. Schwartz / The Urban Country

Imagine you could build a train that could take you 100KM in less than 15 minutes. Where would you put this train? From your home to you workplace? To your Grandma’s house?

I had the pleasure of riding the Shanghai Maglev high speed train earlier this month when I first arrived in China. I am fascinated by this train and the opportunities it presents for the future of transporting people.

Following is a video of my experience on the Shanghai Maglev train to give you an idea of how it feels to progress to 430 km/h and cover a distance of 30 kilometres in only 7 minutes:

This train uses magnetic levitation to prevent the train from having physical contact with the track – thus eliminating rolling resistance to improve efficiency in the amount of energy required to run the train.

Our train systems in North America are far behind the rest of the world. Most of our trains run on dirty diesel and few train routes are actually faster than driving, so it’s no wonder most people still primarily use automobiles as their primary means of transportation.

Commuters in the suburbs of Toronto typically take commuter trains to work not necessarily because it’s faster, but because it is less stressful (and more reliable) than dealing with rush hour traffic and parking downtown.

Our commuter train lines are constantly being pushed further and further from downtown Toronto to provide commuting opportunities for people who live further and further away from the city. All this does is encourages more sprawl. As soon as a new line goes up, large housing communities are built with no forethought about sustainability.

Instead of encouraging people to live further and further away from the city where they work and building unnecessarily large houses, we should improve our existing transit systems to encourage people to use a cleaner method of transportation than single occupancy vehicles to commute to work.

Building a high speed electric train coupled with a bike sharing program or public transit downtown would go a long way for encouraging commuters to give up their automobile for commuting to work.

These types of trains could also be used to connect cities and reduce the number of short-haul high-emission flights and diesel burning bus rides between cities.

Having said that, the Shanghai maglev train is over the top. It cost 9.93 billion RMB to build and at 7000 passengers per day and 50RMB per passenger, it would take 77 years just to pay back the capital costs (this doesn’t even include the operating costs). In other words, this baby isn’t cheap. 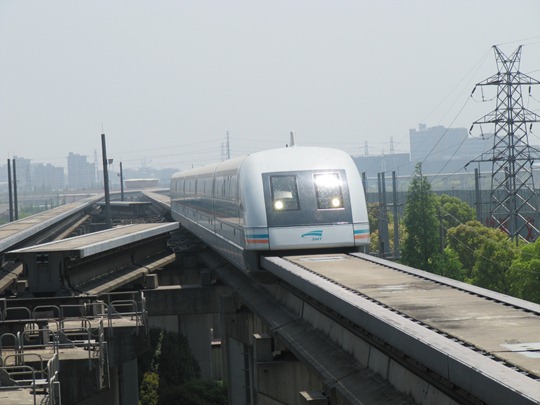 Perhaps a more fiscally realistic high-speed train is the electric train being built on Hainan island to connect Haikou City in the north and Sanya in the south.

This train will operate at about 200KM/h on a traditional railway track and it is estimated that it will take about 90 minutes to travel from Haikou to Sanya across a distance of 308KM. Much of the track is elevated like the Shanghai Maglev train, and the cost to build the entire line is said to be $19.22 billion RMB ($~2.8 billion USD).

Last week I traveled to Sanya from Haikou by bus and it took 3.5 to 4 hours on a diesel-powered coach bus. An electric train has the opportunity to reduce the emissions and greatly reduces the time it takes to travel between these two cities.

If we had electric trains in North America that provided a distinct advantage over driving an automobile, then perhaps we could reach a tipping point and start reducing our reliance on automobiles.