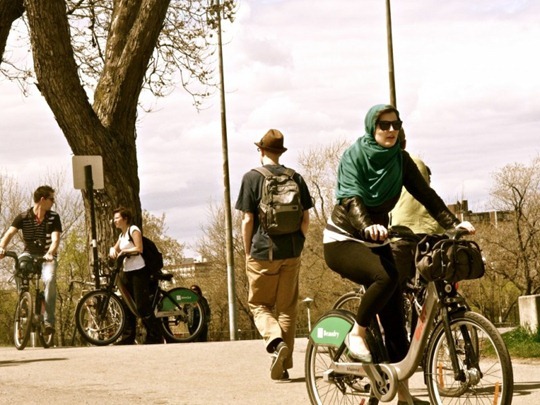 I was a passenger in a friend’s car a couple months ago while she was driving approximately 55km/h in a 40km/h zone in downtown Toronto – a speed deemed acceptable by our car-centric society.

A cyclist who was riding in the bike lane was swerving somewhat erratically (he was probably swerving to avoid a pothole or a sewer on this particular street). She slowed her car down immediately to about 35km/h and moved a bit over to the left to safely pass the “erratic” cyclist. She then cursed at cyclists for their bad riding skills (presumably targeted at me as well given my reputation as a you know, bicycle activist).

It’s no coincidence that drivers are more aware and cautious on streets that have more cyclists as opposed to streets where there are very few cyclists. Furthermore, wobbly cyclists are traveling slow and have more time to react to car doors and other objects they may encounter while riding in the city.

Thus, I propose that wobbly cyclists are good for improving safety in a city.

This is an unintentional perk to having a bike share program in our city too – one that mixes inexperienced riders with motor vehicle traffic.

A recent article on Streetsblog digs into the safety record of bike sharing schemes around the world. It found that Paris’ Vélib system – which has 20,000 bikes in rotation – has a lower accident collision rate than normal bikes:

“The accident collision rate is lower on a Vélib’ than on ‘normal’ bikes,” a spokesperson for the office of Paris Mayor Bertrand Delanoë told Streetsblog. In 2009, the most recent year for which data is available, Vélib’ riders were responsible for one-third of all bike trips in Paris but were involved in only one-fourth of all traffic crashes involving a bicycle.”

Similar statistics can be found while looking at London’s Barclays Cycle Hire system:

“So far, after 4.5 million trips, no bike-sharing user in London has been seriously injured or killed in a traffic crash, according to Transport for London. Only 10 bike-sharing users were injured at all in the first 1.6 million trips on the system, a statistic that was compiled earlier. A spokesperson also told Streetsblog that they estimate that half a million bike trips take place across London each day, 20,000 of which are on Boris Bikes. Finally, during 2010, 10 people were killed, 457 seriously injured and 3,540 non-seriously injured while cycling in London.

Montreal has a similar story. In its first year it logged 3.5 million kilometres and reports just five collisions – all of them minor.

One of the arguments against bike sharing schemes is that they will flood our streets with inexperienced cyclists causing collisions with automobiles and wreaking havoc on our streets.

In reality, the effect is the opposite. More bicycles = more cautious drivers. Inexperienced cyclists create a calming effect on our drivers. And if that’s what it takes to slow down automobiles in our city, then great – because road engineers aren’t doing much to slow down traffic at the moment.

Thank you wobbly cyclists all around the world for helping to tame the beasts on our streets from endangering us.