The Fixer Gets It Right 14 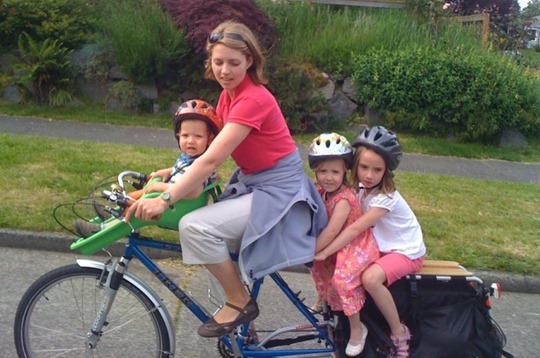 Mother and her three children riding home from school – by Brad Hawkins / Courtesy of RateMyVelo.com

Two weeks ago I wrote an open letter to Toronto Star newspaper columnist Jack Lakey who calls himself “The Fixer” because he fixes things that are “broken in your neighbourhood”.

I critiqued “The Fixer” for his angry rant against cyclists because it perpetuates an animosity towards bicyclists who are already treated like second class citizens, and we sometimes have to break the law just to stay safe.

But most of us are courteous and don’t endanger other people, so I didn’t appreciate the generalizations and hyperbole in Mr. Lakey’s rant.

After writing a subsequent Fixer article highlighting cyclists who ride through a park where bicycles are banned, Mr Lakey emailed me to ask for my comments.

I basically responded that cyclists shouldn’t be banned from parks in the first place (and in fact the vast majority of parks in Toronto allow bicycles), but I also pointed out that I appreciated the fact that it wasn’t a general rant against cyclists, and it actually targeted a specific issue and specific cyclists who were using the park despite the prohibition.

I also thought it would be appropriate at that point to invite Mr. Lakey on a ride around Toronto to show him some of the things that are broken in the city that cyclists have to deal with every day (and there are many).

The Fixer accepted my offer and will join me for a ride around Toronto in mid August on his trusty old Raleigh bike that his wife gave him as a birthday gift more than 20 years ago.

If you live in Toronto and have suggestions of “broken” places to take Mr. Lakey, I’m compiling a list and will devise a route in the next week or two.

These suggestions were published in The Fixer’s column yesterday entitled “Give cyclists space, and a little respect”.

I asked the following of motorists:

14 thoughts on “The Fixer Gets It Right”