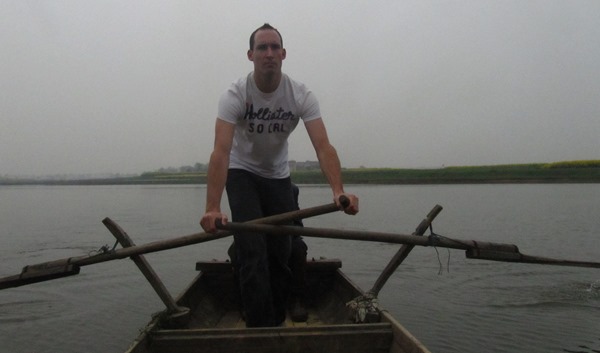 Like all good things, 2012 has now come to an end. 2012 was a year full of adventures and many “firsts” for me. I spent the first four months of the year living in China, on Hainan island located about 500 kilometers south west of Hong Kong in the South China Sea – my first time living abroad. My daughter’s grandparents live there so it was wonderful for Sofia to spend those four months getting to know them.

I don’t think a single day went by during those four months that I wasn’t outside on my bicycle.

While in China I was able to continue working at my job as a technology consultant working remotely with my same Canadian clients. I am grateful to have the ability to work anywhere in the world where there is an Internet connection, and those four months in China show that it is possible to travel and make a living through telecommuting.

While in China I experienced my first overnight train, riding solo on an 11-hour trip from Hainan to Guangzhou. Shortly after the late night departure I made myself comfortable in my bunk and fell asleep. Moments later I was awoken by the feeling that the train was floating on water. It wasn’t a dream. Indeed, that is exactly what was happening – the entire train goes across the South China Sea on a floating barge.

In Guanzhou I had the honour to help a man speak to the Chinese ticket attendant at the train station. The interesting thing is that the man asking for my help was Chinese. He spoke English but didn’t know a word of Chinese. It felt as if I was in the middle of a comedy skit on Saturday Night Live. A Chinese man asking the Caucasian man to talk Chinese to the ticket agent. The man had lived his entire life in Russia and spoke only Russian and English.

In March I visited my grandparents homeland, The Netherlands, for the first time. I was enthralled by the Dutch way of life, the sense of community, and of course the bicycles everywhere. While in Amsterdam I had the pleasure of meeting Marc van Woudenberg – the man behind Amsterdamize.com. Marc gave me a great tour of the city (by bike of course) and we also enjoyed some beers and brunch (not at the same time). In addition to enjoying Amsterdam I also visited Paris, Rome, Venice, Zurich and Brussels for the first time.

Back in China, I had the amazing experience of visiting a poor farming village a few hours outside of Wuhan in the Hubei province in April. I was fascinated by how happy the villagers were even though they had such little wealth or material possessions. Money makes life easier but doesn’t buy happiness. The documentary “Happy People” reinforces this. Please do watch it if you have the chance (it is available on Netflix).

Returning to Canada in May induced some culture shock for me. I was gone long enough that home felt like a whole different world. But Toronto was so beautiful when I returned. People seemed so friendly and polite, everything was so developed and clean. Toronto really is a magical place – especially in the summer. I had realized how many things we take for granted in western society, like the simple pleasure of being able to drink water from the tap without having to boil it first.

After returning to Toronto my wife had decided she wanted to buy a car, so after 2 years of being car-free and using car sharing services when a car was needed, she bought her first car – a Honda Civic. Being car-free had saved us roughly $15,000, but she wanted to give car ownership a shot, so there wasn’t much I could do. The car is almost never used on weekdays, but does come in handy on weekends and during the Christmas holidays to get us to our family dinners in various cities.

Since she had insisted that she was buying a car, I decided I would pick  myself up a Dutch cargo bike that would help me transport my daughter around the city without relying on her car. It also comes in handy when I need to get to the airport when I travel for business. My trips to the airport by bike aroused the interest of the Toronto Star, because sadly, getting to the airport by bike is an abnormal thing to do around here.

In November I also had the opportunity to finally meet Mikael Colville-Andersen when he was on a brief layover in Toronto before flying back to Copenhagen. Yvonne Bambrick and I gave Mikael a tour of parts of the city and we enjoyed some tasty beverages and a burger and checked out Toronto’s first cycle track.

Thanks everyone for a wonderful 2012, and I am looking forward to an even better 2013! Happy New Year!