This harmful style of driving wastes gas, creates unnecessary pollution, and creates unsafe conditions for motorists, pedestrians and cyclists, and is bad for our stress levels and overall health.

The intention of traffic signals was to calm traffic, but it instead sometimes has the opposite effect of creating drivers who are racing to “beat the red”. Un-timed traffic signals result in inefficient traffic flow, leaving scores of cars sitting idle and scores of other cars racing to make the green.

While heading to Collingwood, Ontario to go skiing on my Christmas break last week I encountered several roundabout junctions that weren’t there the last time I had visited Collingwood several years ago.

These roundabouts were recommended in a 2007 Environmental Assessment that was completed on behalf of the Town of Collingwood. They were recommended to ensure “future traffic volumes can be adequately accommodated”, while also increasing safety and reducing environmental impacts. 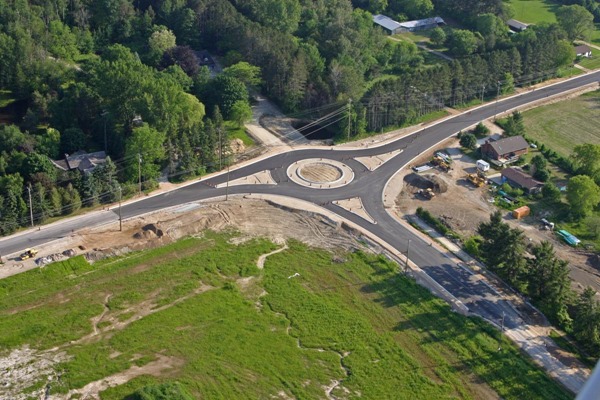 Collingwood roundabout under construction – Photo courtesy of the Town of Collingwood

When the space warrants roundabouts, they can be a great way to preclude the limitations discussed above that are inherent with traffic signals.

Furthermore, the cost to build a roundabout pales in comparison to the exorbitant costs of building an overpass. The Collingwood roundabouts cost about $600,000 each, while an overpass can cost anywhere between $4 million to $12 million, depending on the configuration.

When there is enough space to construct them, roundabouts are an extremely efficient way to keep traffic moving while also improving safety for pedestrians and bicyclists when designed properly.

A Dutch study of 181 intersections that were converted to roundabouts found a reduction of 73% in pedestrian crashes. The National Cooperative Highway Research Program (NCHRP Report 572) found a 67% overall reduction in collisions following the implementation of roundabouts at 26 multi-lane intersections.

“Vehicles operating in a roundabout result in lower environmental impacts, by keeping traffic moving at a more consistent lower speed and reducing idling.  The shorter delays and “rolling” approach to roundabouts generally reduce fuel and energy consumption, greenhouse gas emissions, the carbon footprint, as well as a reduction in noise to the surrounding community.  The longer delays and the start and stop approach to signalized intersections will generally have a more demanding impact on the environment.”

To take our Canadian roundabouts one step further, we need only to look at the Dutch for inspiration. Watch this video from our friend Mark over at Bicycle Dutch, showing a modern roundabout in the Netherlands. Notice how bicyclists have the right of way to drivers. But despite this, cars still seem to flow fairly well through the roundabout.

Mark also has a wonderful write-up on the evolution of the Dutch roundabouts on his blog.

It is great to see pragmatic traffic design solutions popping up in Canada rather than reverting to the old thinking of building stop signs, traffic signals or overpasses at every junction.