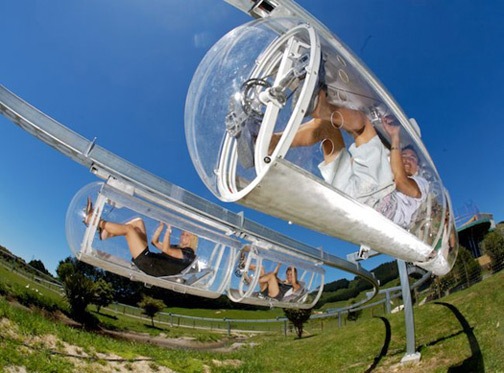 This is the possibility that inventor Geoffrey Barnett had envisioned when he first thought about the idea while working in Tokyo. He wanted to find a more efficient means to cross the city. Six years later, in November 2007, the Shweeb monorail amusement ride opened for business at Agroventures in New Zealand, about 3 hours from Auckland. 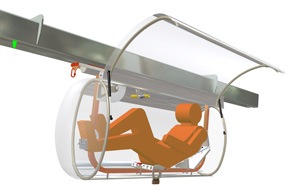 The Shweeb is the world’s first human-powered monorail. One to four people can use the Shweeb and it uses about half of the energy required to ride a racing bike, or about 1/3 of the energy required to ride a mountain bike. The Shweeb is enclosed – thus shielding the rider from poor weather conditions – and they say it is as comfortable as lying in a hammock. 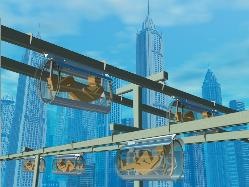 There are however a number of logistical constraints that will make the Shweeb a difficult system to implement.

Although being enclosed has its benefits to prevent poor weather from impeding you in your journey, it also has its downside. Being enclosed on a hot summer day or cold winter night is less than ideal, so the capsules would need to be cooled in the summer and heated in the winter.

“The result is the most efficient vehicle on earth, the most inexpensive infrastructure of any proposed urban transit and one of the highest capacity systems available – potentially delivering thousand’s of people per hour in a very small airspace. All this with zero carbon emissions and no parking worries or cost!”

Although the Shweeb may be the most inexpensive infrastructure of any proposed urban transit, it would surely still have a significant price tag to build and maintain. But then again, what transit system in the world is truly inexpensive to implement or operate? (Besides a bicycle-sharing system of course).

One blogger states an obvious concern about what happens if a capsule breaks down mid-trip: “Imagine if a pod breaks down mid trip: the person inside would be trapped, and all the people behind it would be stuck until it’s fixed”. It’s not that he doesn’t like the concept, he just doesn’t think it could be viable, “As an amusement park attraction, the Shweeb is pretty cool; as mass transit system, it’s stupid”.

I believe that some day this system could be a viable method of transportation once all of the possible constraints have been considered and resolved. The great minds of the world have come together to solve difficult challenges before, so I don’t see why they couldn’t find a way to re-engineer the Shweeb system to make it a viable method of transportation in a major city.