Diesel Trains Are NOT the Answer 6 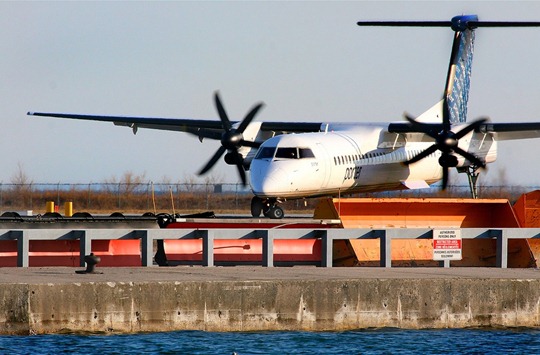 The downtown Toronto City Centre Airport has been a political hot potato for many years. Airport expansion advocates were pushing for a bridge to the Toronto City Centre airport that current Mayor David Miller quashed when he was first elected in 2003.

Environmentalists and local residents often refer to noise and air pollution as the primary reason for disapproval of the airport’s existence in this seemingly never-ending battle.

As someone who cares deeply about the current state of our world and the impact we have on the environment, the island airport has been a source of contradicting feelings for me. Here’s why:

Toronto’s main airport – Pearson International – serves more than 32 million passengers a year (more than 87,000 per day). Thousands of people each day drive or take taxis to Pearson airport – many of which originate from downtown Toronto, 25 kilometres away.

Shouldn’t we be encouraging people to commute a few kilometres to a downtown airport rather than driving or taking a taxi 25 kilometres to Pearson airport?

The passenger airliner operating out of the downtown airport in Toronto – Porter Airlines – operates a fleet of modern Bombardier Q400 turboprop planes – known for their low emissions, fuel efficiency and quietness compared to your typical jetliner.

Why wouldn’t the city promote the downtown airport for shorter flights within North America?

Well, as I mentioned previously, pollution is the major reason for disapproval. I guess having thousands of people sit in taxis on the way to the airport 25KMs away doesn’t contribute to pollution. Or what about the pollution caused by Pearson airport? I guess that doesn’t matter because it’s “not in my backyard”.

So how do we solve the problem of pollution and gridlock caused by all the cars driving to Pearson airport?

Many Torontonians think that the city needs a rail link from downtown to Pearson airport and the proposed plan to provide this service has been approved and is moving forward. But at what cost?

The rail link being proposed by Metrolinx involves hundreds of diesel engine trains traveling the 25KM from downtown to Pearson airport. The media often cites 400 trains per day, a seemingly high number given this would result in a train leaving every 3 and a half minutes, 24 hours a day (or a train leaving both Union station and the airport every 7 minutes).

Is this really the solution that we want? The Clean Train Coalition doesn’t think so.

Let’s think about this for a moment. Our solution to reduce gridlock and pollution is to run 400 diesel trains a day, primarily supporting downtown residents and visitors only? Does this really sound environmentally friendly? It sounds ridiculous to me.

If the trains were electrified, at least we would be adding less pollution to our skies, but running 400 diesel trains will only add more pollution.

But still, something doesn’t add up. Our solution to reduce pollution is to run 400 diesel trains a day, using diesel fuel, and a technology that doesn’t even exist.

I have a simpler solution. Expand service at the downtown Toronto City Centre airport for flights within North America, and invest in electric technology that already exists to bridge a connection to Pearson airport.

All we would need to do create an above-ground electric rail link from Kipling subway station to extend an existing underground electrified system to the airport – a mere 11 kilometres away.

We have already invested billions of dollars in our subway system. Why not expand that system to reach the airport?

Over the years I have been on many business trips where I needed to fly. Almost exclusively, I ride the subway system – reaching the airport in merely 45-60 minutes from my downtown King West residence. An extension to the subway would cut that time down and improve reliability.

Alternatively, for flights within North America, I could walk to downtown airport – a mere 2KM away from my home.

Sometimes the simpler, cheaper solution is the better solution. At least until we are ready to invest in full electrification.

Photo courtesy of Never Was An Arrow II

6 thoughts on “Diesel Trains Are NOT the Answer”