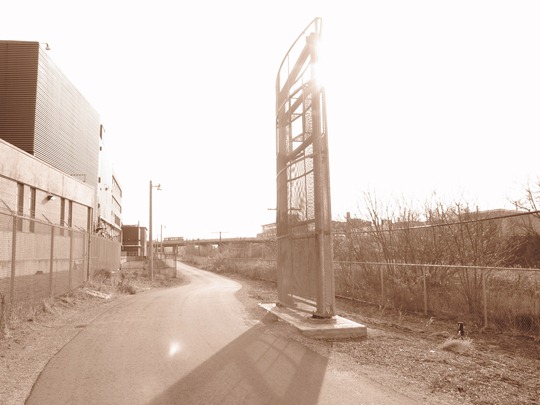 Photo and video by James D. Schwartz / The Urban Country

On October 30 2009, the first section of the West Toronto Rail Path officially opened. A 2.1KM stretch from Cariboo Ave. in the north to Dundas St. West in the south, the rail path provides cyclists an automobile and traffic light-free route.

Although a positive step in the right direction, this $4 million path will be of little use for prospective cycling commuters until the full length of the proposed path is completed – or until it connects cyclists with a better network of cycling routes (Check out how they do it in the Netherlands).

The rail path was originally hailed as a possible future bicycle superhighway, but cyclists have criticized the trail for its lack of separation between pedestrians and cyclists.

When I first learned about this path a couple years back, I was excited about its potential. If implemented properly, cycling commuters could ride to work from the northwest side of the city without having to deal with traffic lights or automobiles. It’s a cycling commuter’s dream.

Unfortunately it will be several more years before the remaining portion of the path is completed – if it ever gets completed. The plan is to extend the trail further east to Strachan Ave., but the ideal state would see the trail extended all the way to Union Station.

The following video is a tour of the path based on footage I took this morning featuring Metric’s “Gold Guns Girls” (acoustic version).

All flaws aside, I still think this trail has a lot of potential, and there are several other railroad corridors that could be leveraged to create a network of useful bike paths.

If bicycles were given an unobstructed, safe, and efficient bicycle trail into the heart of the city, we would see a lot more people on bicycles. People will always flock to their cars if cars are the most convenient and efficient way to get to the city.

Satellite road tolling and a proper network of bicycle paths could change the status quo.