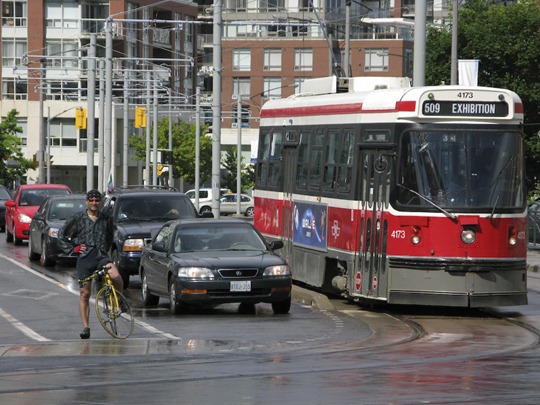 “the fact remains we don’t have a choice; if we want Toronto and environs to prosper, there’s no alternative but transit”.

Sorry Mr. Hume, but there is another alternative. A very viable alternative that most in the media and government choose to ignore – it’s called cycling.

Mr. Hume ends that same paragraph with a statement that illustrates how foolish it is to rely on transit as the only alternative to driving:

“you can be sure that the cost of bringing us into the 21st century will exceed $50 billion over the next few decades”.

To suggest that a city needs to spend $50 billion dollars to solve its transportation problems when that same city can’t even afford the operating costs of the existing transit system is even more foolish.

Don’t get me wrong, transit is important – but Toronto needs a more sustainable solution to funding its current transit system before it would be prudent to spend billions and billions of more dollars to build more transit that it can hardly afford to operate.

With the Mayoral race coming up in October, Toronto needs a leader who can look beyond expensive transit and the impractical automobile to solve big-city issues. Pragmatism should be the new “progress” of the 21st century. 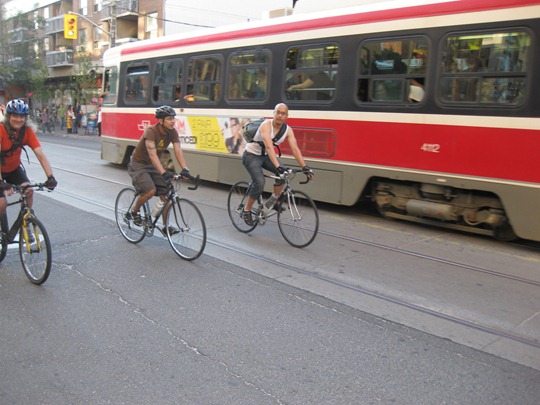 The bicycle is a great tool to commute in the city and can compliment those who ride transit. But city planners need to make cycling convenient and safe.

Building an inter-connected network of cycling infrastructure in the city and getting more people on their bicycles will help offset the operating costs of transit and address the issue of congestion and wear-and-tear that result from automobile use.

In the city’s current state of operations, the more people who take transit, the more indebted the city becomes.

The $3 fare you pay to ride the subway only covers about 70% of the operating costs and doesn’t even begin to cover the billions of dollars of capital funding to build new transit lines or purchase new buses, streetcars, or subway cars.

The city spends about $15-20 million dollars on cycling infrastructure each year compared to about $1.2 billion on transit.

If a million people decided to start cycling to work tomorrow, cycling infrastructure annual costs wouldn’t necessarily need to increase. This is the beautiful thing about cycling – it helps reduce a city’s operating costs, and results in healthier citizens.

If a million more people decided to take transit tomorrow, the existing system wouldn’t be able to handle the volume. The same goes for automobiles – there simply isn’t enough space for another million automobiles.

Outgoing mayor David Miller was primarily focused on transit – advocating for massive investment of billions of dollars – as are many of the contenders vying for the mayor seat.

There’s much easier ways to do that, and much more clever ways to impress future generations, and that’s by implementing bicycles on the urban landscape.

Unfortunately politics is not very often about pragmatism. Political leaders are often elected on ambitious platforms of massive spending. There’s nothing glamorous about building bicycle ways and most high-profile politicians are out-of-touch with the needs of the average urban dweller.

The current list of mayoral candidates is far from inspiring.

One candidate is advocating for banning bicycles from main city streets, another is pushing for selling off all city-owned assets.

The closest I have seen to a cycling-friendly candidate is hardly cyclist-friendly as he is the head of the Toronto Transit Commission – and he has since resigned from the mayoral race after living up to his Toronto Sun-given nickname “GIAM-BONER”.

Between now and October I hope to see a candidate who can look beyond the motorways and transit lines to see a glamorous future of urban cycling in our city.