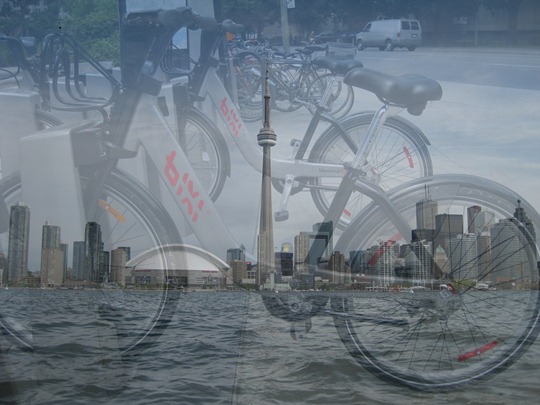 In November, The Urban Country broke news that Toronto’s upcoming bike share system would run year-round when it arrives in 2010. In that article, we asked whether Toronto was ready for BIXI, Montreal’s bike sharing system that has since signed contracts with Boston, London, Minneapolis and Melbourne.

We have recently been informed by our friend Herb over at iBikeTO.ca that two separate inside sources at City Hall are saying the city may axe bike sharing this year.

Bike sharing useless and a waste of money?

Sources are telling us that someone in the City Manager’s office feels bike sharing is useless and a waste of money, and may block the deal with Montreal-based Public Bike System Company – a deal that we were told in mid-January would be released in a report “in a couple weeks” by the Manager of Cycling Infrastructure, Daniel Egan.

BIXI installed at no cost to the City

It would be unfortunate to pass on such a great opportunity for this city since BIXI requires very little investment from the city and the taxpayers. The Public Bike System Company would foot the bill to install the bike rental stations and provide the bicycles, so it seems odd that the city would axe these plans for fiscal reasons alone.

I was told the city would only be responsible for identifying the preferred locations of the mobile bike sharing stations, and – unlike Montreal -Toronto wasn’t planning on removing parking spaces to make room for the bike stations. Rather, they would be installed on existing sidewalks and other public spaces.

Is it possible that the city struggled to find space for the BIXI stations? Would parking spaces need to be removed? Was there turmoil between the city’s parking authority and City Hall? Does BIXI require an investment from the City that they weren’t willing to put up?

Hopefully these are just rumours and speculations that turn out to be untrue.

Do your part to save bike sharing in Toronto

As citizens of this city, it is our duty to support what we know is right. I urge you all to email your local councillors to tell them you support a bike sharing program in Toronto – even if you aren’t planning to use it, but you know it’s the right thing to do.

Here is a template you can use to send to your councillor, the Mayor, the City Manager, and anyone else who could support our cause (see below for specific contacts):

It has come to my attention that the City of Toronto may be putting a halt on its deal with the Public Bike System Company (BIXI) to bring a public bicycle sharing program to Toronto later this year.

This would be an extremely disappointing and unfortunate outcome. Traffic congestion, pollution and climate change are major issues that we need to deal with right now as the City of Toronto’s population is expected to rise by more than 500,000 people by 2031.

Bike sharing is important for our city because it provides an alternate means of transportation for short trips while helping people stay healthy and reducing congestion. A bike sharing system would complement public transit very well and I had every intention on using this system on a regular basis.

Bike sharing has worked in other cities around the world, so please do everything in your power to ensure the city makes the right choice for its citizens and proceeds with signing a deal to bring BIXI to Toronto in 2010.

Please do your part to help save bike sharing for a better future for Toronto.

*Update (Feb 17, 2010 @ 8:20PM): The National Post has confirmed that BIXI wants the city to back the program financially. Read more here.

*Update (Feb 23, 2010 @ 8:57AM): Mayor Miller’s office has sent us an official statement in response to our letters to him. Although it doesn’t provide much reassurance of bike sharing moving forward, it at least indicates that they are looking for other funding options to help pay to bring BIXI to Toronto:

“Until 2006 Toronto was home to the innovative and award-winning Bikeshare community bicycle-lending program. Following its collapse the City began developing a business case for a public bike program.

The City considered launching such a program using the Vienna business model (which is also used in Lyons and Paris) where it is provided free to the City and affordable to users because it is supported by revenue from billboards on the bike stations. After much deliberation it was decided not to increase the number of billboards on the street and launched a competitive process to find a company to provide a non-ad-supported version.

A public tender was issued and City Council gave staff authority to negotiate with BIXI, which is owned by the Montreal municipal parking authority, to develop a detailed business plan for launching and operating a Toronto public bicycle system at no cost to the City. Unfortunately, the outcome of these negotiations did not guarantee that there was no risk of costs being incurred.

A public bike program in Toronto is not being abandoned. It remains an integral part of our sustainable transportation plan. The Mayor has instructed City Staff to review the viability of this type of program with other funding options.”