Bike Sharing in Car Capital of the World? 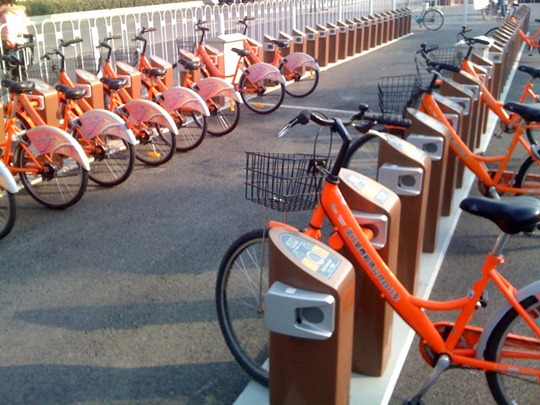 It doesn’t sound logical, but it’s a reality on a planet that simply doesn’t have enough space for all of its inhabitants to drive a car.

Bicycles are a practical and low-cost solution to the major baggage that comes with the automobile. The automobile has been the root cause of many modern day issues, including: pollution, gridlock, stress, wars, climate change, obesity and urban sprawl.

My friend Mark recently moved back to Shanghai where he had previously lived for 3 years before returning to Canada in 2008. Mark was pleasantly surprised to return to Shanghai to see the bicycle sharing system gain momentum after the city initially launched in September 2008.

Here is a typical bike lot outside a Shanghai subway station: 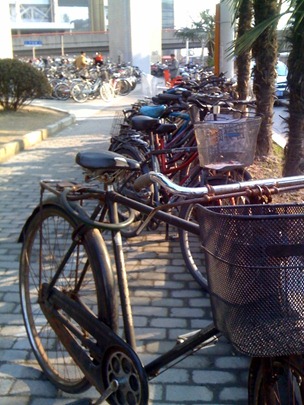 Mark and I tested out the Bixi bicycles last summer after my solo kayak expedition from Toronto to Montreal. He says the Shanghai bike locking system is simpler than Montreal’s Bixi system, and the structures seem to be more tamper-proof than Bixi. He did however say that the bikes themselves are fairly decent quality but nowhere near the quality of the $2,000 custom-made Bixi bicycles.

Bike sharing in China is extremely important. The number of cyclists in that country has been declining, and Chinese cities have been removing bicycle infrastructure to make room for the onslaught of the North American automobile culture that has swept across Asia.

Bike sharing can help encourage people to use bicycles around the city as an alternative to driving and the Shanghai bike sharing program caters very well to transit riders with carefully placed bike stations outside of train stations (the Shanghai program is actually operated by the Shanghai Metro).

Hangzhou, China is a bike sharing success story, with reportedly 40,000 bicycles in rotation at 1,600 stations. With an urban population slightly larger than Toronto, Hangzhou is a great model for bike sharing. I will be traveling to China in the spring, so perhaps I could make a stop in Hangzhou to test out their bicycle sharing system.

Although I didn’t make it to Shanghai when I visited China in 2007, I was enthralled by the number of bicycles in Beijing as well as the large car-free public spaces such as this one:

The most fascinating aspect of cycling in Beijing is the sheer amount of road space given to cyclists. As you can see in the photo below, some streets provide the equivalent of 2 car lanes on each side of the road. The solid white line separates the vehicle traffic from the two-wheeled traffic. 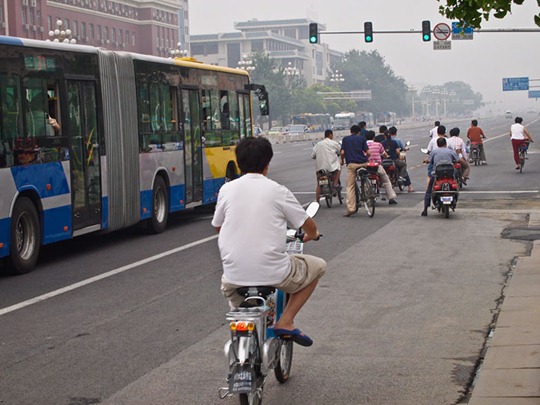 Photo courtesy of The Digital Story

I often chuckle that we are fighting for a mere 2 metres of the road here in Toronto, while Beijing residents are given closer to 6 metres (then again, there aren’t 9 million bicycles in Toronto).

(I really love this song)

Nevertheless, it’s difficult to compare cycling in China to Europe or North America – the culture is vastly different. Most people ride bicycles over there simply because they can’t afford a car.

My sincere hope is that China will return to being a world class cycling country when they realize 16-lane highways through the middle of the city will not solve the gridlock or pollution problem.

The last thing the world needs is a great country of 1.4 billion people to fall into the same trap that we have fallen into here in North America.