Forgetting About the Joneses 5

Back in March 2009, a mock Nissan commercial surfaced on YouTube that pits Hyundai against Toyota, starring Andy Richter and James Adomian.

I thought a slight change to the ending of the video would be more appropriate. (Hopefully the lawyers over at Nissan are sympathetic to us cyclists).

The video highlights something that we have talked about on The Urban Country over the years. People are always trying to out-do their neighbours – keeping up with the Joneses, as they say – which tends to drive our society to consume more and more.

Other “keeping up with the Joneses” articles on theurbancountry.com:

This commercial is different – it highlights how ridiculous “keeping up with the Joneses” really is. It also shows how angry drivers can become when somebody else has an advantage over them (even if it shows a greatly exaggerated and unrealistic response).

When I ride my bicycle in Toronto, I sometimes feel that automobile drivers show animosity toward cyclists – especially during rush hour – simply because cyclists are able to move at a faster pace than their gridlocked automobiles.

It also doesn’t help that there is a perception out there that drivers pay for the roads and thus have more rights to the roads than cyclists. But we have addressed this myth in our “Cyclists Paving the Way for Ungrateful Drivers” article.

I have also found that this animosity can be greatly reduced – by riding at a calm pace, on a sit-up bicycle – though it cannot be eliminated altogether. 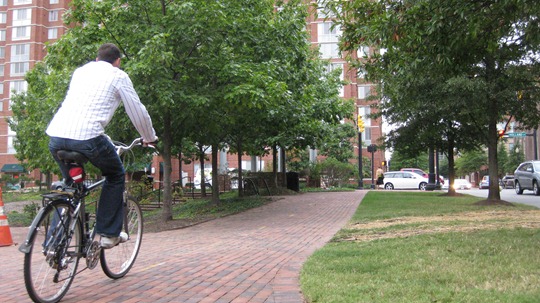 Let’s look at our options here:

I would rather have any old bicycle than a Nissan, Toyota, or a Hyundai. It’s all about forgetting about the Joneses – and having fun and being healthy at the same time!

5 thoughts on “Forgetting About the Joneses”