I Am Responsible for the Gulf Oil Spill… 5 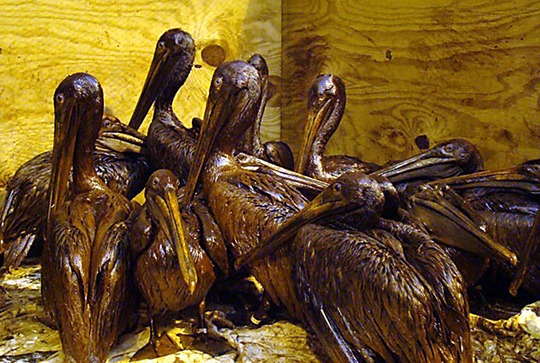 I am responsible for the Gulf of Mexico Oil Spill. I claim responsibility for the 11 deaths, 17 injuries from the explosion, and the millions of marine and wildlife that have been killed or displaced as a result.

Yes, I am responsible for releasing an estimated 1.9 million to 16 million litres of oil into the ocean every day since April 20th.

AND SO ARE YOU…

We brought this on ourselves – me and you. Our addiction to automobiles, cheap gas, plastic, cheap food and big houses has led to this disaster and will lead to future disasters if we don’t change our path.

Many people are furious about the oil spill and are solely blaming British Petroleum (BP) for this disaster – some even calling for a boycott. 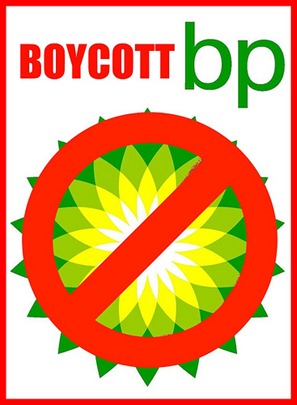 But boycotting BP is not the solution – BP might not even exist after this nightmare is all over. We North Americans always try to blame someone else for problems WE cause.

Am I happy with BP’s negligence? No. But is buying gas from Exxon instead of BP going to solve this problem? No.

BP, Exxon and other oil companies are out there for you and me, and for everyone else who consumes oil.

In North America, we have built cities around automobiles – and hundreds of millions of automobiles require billions of gallons of oil to operate. In fact, the number of vehicles in the United States (~254.4 million) outnumbers licensed drivers.

Those oil-covered birds didn’t deserve this. They weren’t the ones driving SUVs, living in big suburban houses, driving big motor boats, and watching air shows. No, WE did this, and WE deserved this – they didn’t.

Frankly, I’m sick of people complaining about how the oil spill is going to affect the economy. The economy won’t matter if we don’t change our ways.

A recent article that contains photos of the birds affected by this disaster has garnered close to 3,000 comments so far. Most comments are sympathetic to the poor birds – a few called for a boycott on BP, and a small minority claim that “nature will fix this”, because “nature made this”.

Some of the more sympathetic comments were concerned people asking what they can do to change their life to help reduce our dependency on fossil fuels.

Well, my first suggestion is obvious to those who regularly read this website. This brilliant United States billboard graffiti says it all: 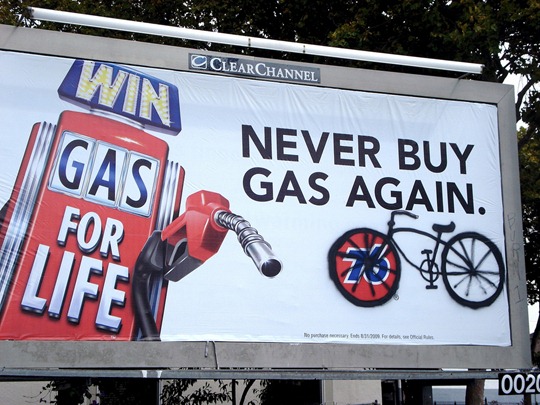 Although a bicycle is a very practical solution to our addiction to oil, it’s not the only solution. Here is a list of other suggestions of things we can change in our lives to reduce our dependency on oil:

I challenge you to choose 3 items from this list that you aren’t already doing, and start now.

If every person in North America each started 3 doing things in this list, we could significantly reduce our oil consumption and start to create demand for renewable energy, bike infrastructure, public transit, high-speed electric trains, and other initiatives that will make it easier to change your lifestyle and leave our children with a better world.

We all created this problem, so let’s all “be the change”.

5 thoughts on “I Am Responsible for the Gulf Oil Spill…”