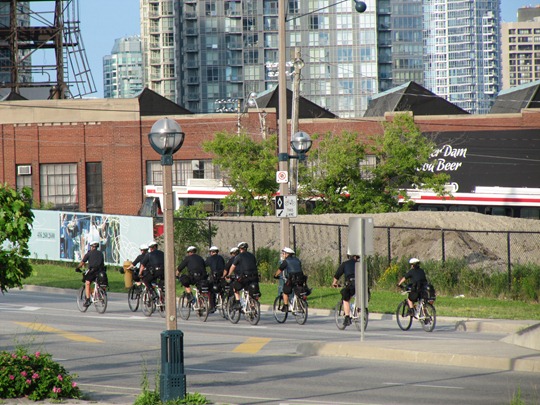 When it comes to cycling, Toronto is not at the world stage. So with the eyes of the world on Toronto this week for the G20 summit of world leaders, Toronto will not be showcasing its cycling culture.

But despite this, Toronto is doing something with bicycles that it can be proud of thanks to the po-po, the 5-0, the fuzz – or by their formal name – the Toronto Police Service.

The Toronto Police have a substantial number of bicycles in their fleet – 247 bicycles to be exact (2008). Compared to the 1371 cars in the fleet, 247 is not such a bad number. That’s 18% – a number that Toronto could only dream of for the bicycle mode share.

With the 5,000+ police officers working this week at the G20 site, these police bicycles can be spotted everywhere.

I captured a few shots of these 10 officers riding side-by-side along Fort York Boulevard while walking the dog this evening: 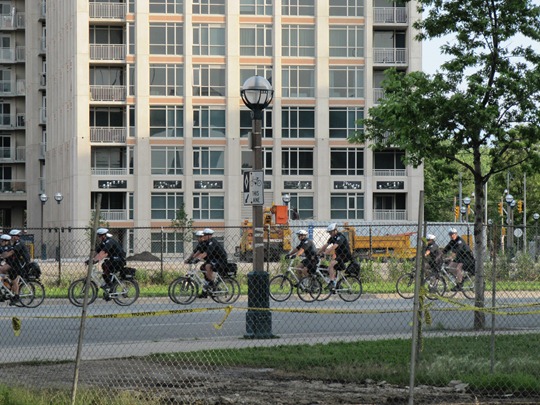 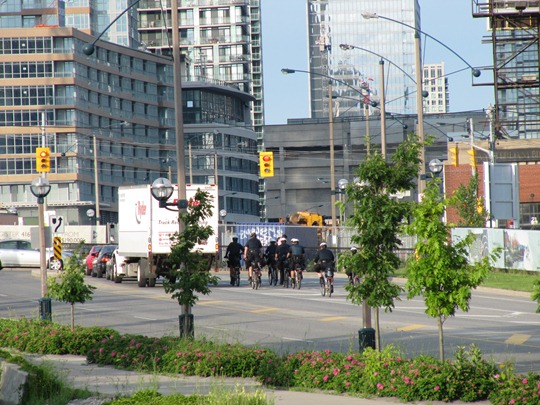 It also may interest you to know that the Toronto Police Service is expanding its “Green fleet” by introducing more bicycles, smart cars, and hybrid cars.

Contrary to popular belief, a police car isn’t an officer’s most valuable resource for stopping crime.  Her radio rather is her most important tool.

Bicycles also provide a great way for officers to stay in touch with their local communities and interact with people – which automobiles are notoriously bad at. Then we have all the side benefits of keeping the officers fit, reducing our costs, oil consumption, pollution and CO2.

Surprisingly, even a strong cycling city like Copenhagen only has officers on bicycles as part of a one-year trial program according to Copenhagenize.com’s Mikael Colville-Andersen.

So it seems we finally have something to boast about to our Nordic friends. Take that Copenhagen!