Wear a Helmet And Get a Cycling Utopia 15 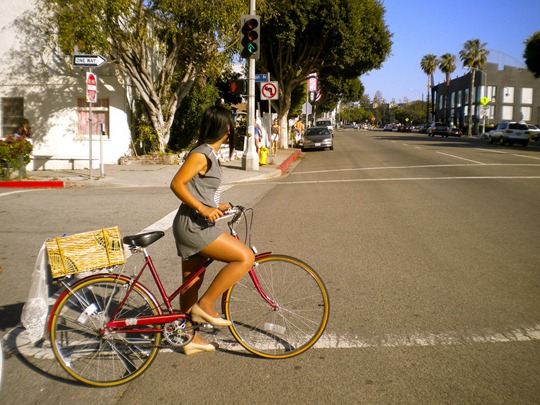 Shawn Micallef recently wrote an article on the Spacing.ca Toronto blog where he argues that anyone who wants better bicycle infrastructure in Toronto should wear a helmet if they expect to be taken seriously.

Micallef claims that anyone who doesn’t wear a helmet appears to be “frivolous and reckless” and he feels that people don’t have the right to argue for safer infrastructure while “not practicing helmet wearing”.

I would gladly wear a helmet if it resulted in a utopian bike network modeled after the Netherlands or Copenhagen. But it doesn’t work like that Shawn. Focusing on the helmet issue ignores the real issues and only serves to divide non-helmeted and helmeted riders.

Shawn shot back at me on twitter by saying “A huge amount of cyclists are already alienated by anti-helmet rhetoric. There is no community to divide”.

It’s also important to note that the countries that have the lowest cycling fatality rate are the countries where virtually nobody wears helmets. There’s a reason for that.

“Canada was, in part, founded by people escaping European culture, so let’s not revert”.

Okay, so we don’t want European-style bicycle infrastructure, and our solution to safety lies within a plastic + foam bucket? 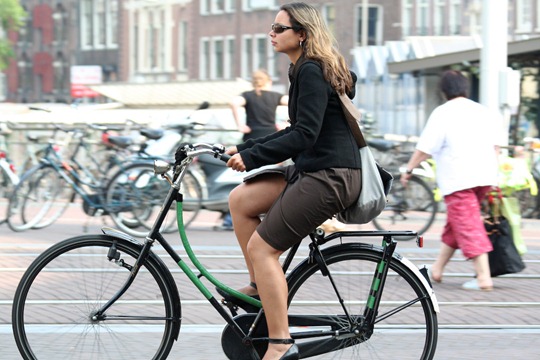 [Photo] Another rogue and dangerous cyclist in Amsterdam courtesy of mayhem. Who on earth would ever want Toronto to revert back to this?

A significant number of motorists die every year from head injuries. Shouldn’t drivers also be required to wear helmets to increase their safety? Maybe we shouldn’t give drivers any road space until they start taking their own safety into consideration.

Let’s look at an interesting analogy by a commenter on a previous Spacing pro-helmet article:

If cars were forced to drive in the sides of lanes that were exclusively for big rigs, and motorists kept dying in car/big rig collisions. Now, if there was legislation put through for drivers safety that mandated that drivers wore helmets, what would be the reaction of the driving community? Would it be to debate whether or not helmets provided adequate safety for drivers, looking at data from different cities? Or would it be to challenge the legislation because it doesn’t address the issue that drivers are forced to drive in unsafe circumstances that lead to collisions.

The point here is that riding a bike is inherently safe. If people are dying at the hands of 1+ tonne automobiles, then let’s make changes to make it safer.

Let’s not forget that it is automobiles that are causing all of these pedestrian and cyclist deaths. If we can acknowledge this first, then we can find solutions to fix it. Throwing helmets on pedestrians doesn’t get to the root of the problem, nor does throwing helmets on cyclists.

Micallef also seems to think that if cyclists obey all the rules of the road, they will win the hearts and minds of motorists and earn respect and their place on the road – and thus earn our “utopian” bicycle infrastructure.

To be honest, I used to share a similar sentiment. But I now believe that it doesn’t matter what cyclists do – there will always be drivers who don’t want us there.

Whether you wear a helmet or not, some drivers will always pass too closely. If you make a complete stop at a stop sign, a driver behind you will be angry because you are delaying him. If you roll through the stop sign, another driver will say cyclists don’t “obey the law”.

If you jump ahead at an intersection before the light turns green to give more space, someone will accuse you of running a red. If you sit and wait for the green, they will be frustrated that they have to pass you with very little space.

I can agree with Micallef on one item – cyclists and drivers need to better accept each other’s coexistence. I ride without a helmet, but I ride cautiously, safely and respectfully.

The day I accept that cyclists have no right to the road without wearing a helmet is the day I am no longer on this earth.

15 thoughts on “Wear a Helmet And Get a Cycling Utopia”