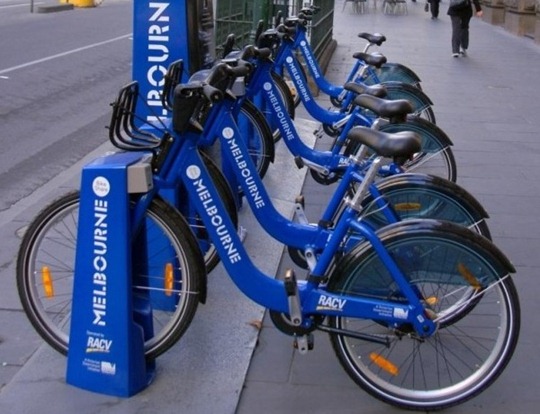 Mike and his crew will ride in regular clothes to highlight how these urban sit-up bicycles need not require a change of clothes or special equipment to operate. Controversial however, considering Australia’s mandatory helmet legislation. But a ticket for cycling without a helmet is a small price to pay for promoting utility cycling in Australia.

Australia has a disorder that is unfortunately making it very difficult to make bicycles an accepted mode of transportation. Its mandatory helmet law creates a barrier to cycling, and its hunched over lycra-clad racing monoculture makes relaxed European sit-up cycling seem out of place.

Melbourne’s bike sharing scheme – as Mike likes to refer to as “Mixi” – can help treat this disorder. It can help make European sit-up style bicycles mainstream and encourage Australians to use a bike for transportation in regular clothes.

But Australia’s helmet law could prevent the bike sharing system from being successful. The primary benefit of bicycle sharing is convenience – you can hop on or off a bike at any time (or you can walk, or take transit, or drive or take a taxi without having to worry about leaving your bicycle behind).

But helmet legislation all but eliminates this convenience because you need to carry a bicycle helmet with you if you ever plan to hop on a “MIXI”. Suddenly this convenient bike sharing system isn’t so convenient anymore.

Furthermore, renting out helmets is not a realistic way to address this problem due to health and sanitary risk and the logistics would be complicated to dispense and manage helmets.

Back in Australia, Rubbo is proposing an exemption to the helmet law for these sit-up style bicycles, and if his helmetless ride on Saturday garners some attention from the media, he just might be able to reach out to the politicians who can help with this cause.

Mike makes a strong case that bike sharing schemes are inherently safe due to the style and sturdiness of these sit-up bicycles. In Montreal, Rubbo says only 40% of cyclists wear helmets, while BIXI – Montreal’s bike sharing system – only experienced 5 accidents (none of which were serious) in the 3.5 million kilometres ridden in its inaugural year – according to a BIXI rep.

A helmet can offer some protection in low-speed collisions, but there is no denying that safe cycling goes far beyond anything a helmet can do. The safest country in the world to ride a bike is coincidentally one where virtually nobody wears helmets.

As Mike says, true cycling safety is under the wheels, not on the head – an obvious reference to great bike infrastructure. But it’s even more than that – it’s about smart, safe riding, education and social acceptance by people using other modes of transportation.

Helmet laws only create one more barrier to keep people from cycling – as if we don’t have enough barriers already.

If you are in Australia and would like to support this cause, meet Mike and the crew at 10AM on Saturday, July 24th at the Bike Share docking station on Melbourne University campus in Tin Pan alley.