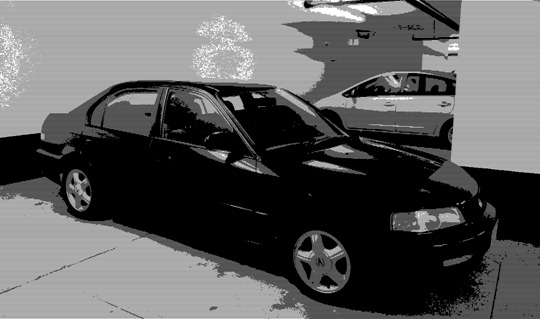 Most readers on here probably aren’t aware that I own an automobile. I don’t spend a lot of time talking about it, but I’m certainly not ashamed of it.

I believe cars serve a useful purpose, but I also think North Americans need to drive a lot less than we do if we want to have great cities and leave the world better off for future generations.

Because my bicycle is my primary mode of transportation, my car mostly sits in the underground parking garage collecting dust. There are however three situations where having an automobile comes in handy for me. The first (and most common) is to transport myself to hockey games. In true Canadian stereotypical form, I play hockey most Friday nights in the fall and winter 35 kilometres from my home.

Bicycling to hockey games is certainly an option for a closer venue – I use my bike to get to my Wednesday morning games, where the arena is only 3 kilometres from my home – but the Friday night 35km commute is simply too far and unpleasant to ride.

The second situation is for large grocery runs. Although we do most of our groceries at local stores on foot or by bike, we do enjoy doing a larger grocery run once a month in the car to stock up on bulk items.

The third is to head out of the city on weekends to visit family, or to occasionally go camping in the summer. A car is typically the only option to get most places outside the city.

The decision to rid myself of my car came a few weeks before October 5th – the date that my auto insurance was slated to be renewed. I have owned my 1998 Acura 1.6EL since 2005, and this car has served me well. It’s very fuel efficient (almost as fuel efficient as most hybrid vehicles on the market today), requires very little maintenance, and with its manual transmission it’s enjoyable to drive. 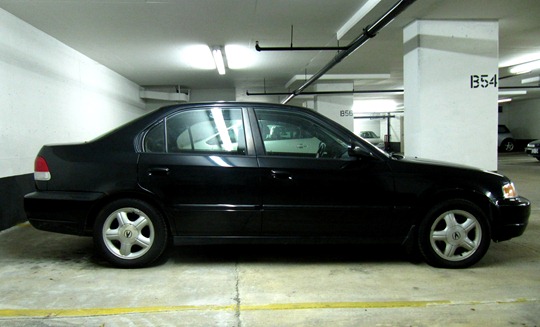 The biggest factor in coming to this decision is the fact that there are plenty of options in the city these days for accessing an automobile when the need arises. Car-sharing is becoming increasingly popular in the city, and the two car sharing companies (US-based zipcar and Toronto-based Autoshare) are competing head-to-head.

After doing some research and comparing these services, I went with Autoshare. One of the main reasons for choosing Autoshare was the lower cost than zipcar for the small amount of usage that I would require. I also liked the local nature of the company rather than the international, US-based zipcar.

Although Autoshare provides me a great option for getting to my hockey games on Friday nights, I do have other options I can employ – including car pooling with a teammate who lives down the street, or I could jump on the subway and carpool with a friend at the end of the subway line. I doubt I will need to use Autoshare for hockey more than once or twice a month.

Car sharing saved me last Thursday when I had a meeting in the north end of the city – about 20KM from my home. I had planned to bike the entire distance, but about 5KM into my ride I changed my mind due to the hard downpour I was encountering. So I called Autoshare and told them I needed a car for a couple hours. They had one ready for me only a few minutes from where I was and within 5 minutes I was inside an Autoshare car and en route to my meeting.

Booking one of Autoshare’s 200+ cars is simple to do online or over the phone. When you search for a car online, it tells you the makes and models that are available for your desired time slot as well as the distance from your home: 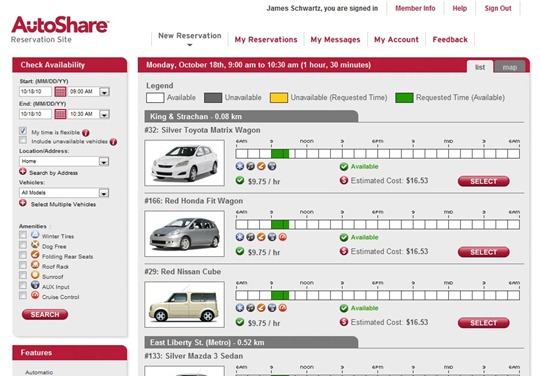 There is no human interaction when you pick up and return the car – you simply swipe your access card or use the lock box to retrieve the car keys, and off you go.

The upkeep of the cars is done mostly by members who fill up the gas tank or go through a car wash when required – keeping the receipts for reimbursement.

For periodic weekend trips outside the city, I will use a car rental service (not to be confused with car sharing). Car rentals aren’t as convenient, but are priced more affordably for longer trips, while car sharing is designed for short trips within the city.

As always, my bicycle will continue to get me around for 95% of my trips. But car sharing will make it convenient to live without an automobile for those trips that require leaving the city.