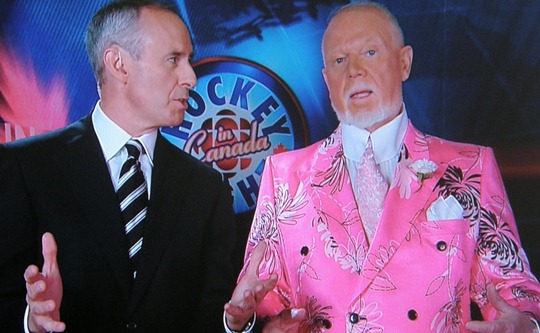 At the end of his speech, Cherry stated:

“Rob Ford is going to be the greatest mayor this city has ever ever seen as far as I’m concerned. And put that in your pipe, you left wing kooks”

Normally I wouldn’t get worked up about Don Cherry’s controversial comments. But when he goes out of his way to alienate and demonize people who choose to use bicycles for transportation, I am deeply offended.

For someone who claims to be standing up for the “little guy” – the blue collar crowd – Cherry seems to have it backwards.

Dave Meslin – the founder of the Toronto Cyclists Union – made some great points in his “open letter to Don Cherry” on Facebook. I wanted to post it here in its entirety for those of you who aren’t on Facebook, and because Mez did an amazing job of taking the higher road – instead of resorting to childish insults like Cherry has done:

Congratulations on being chosen to introduce Mayor Ford on his first day at City Council.  It’s quite an honour.

I think it’s unfortunate that you used the opportunity to be divisive and fan the flames of partisan politics at City Hall.  What our city needs, and wants, is a collaborative approach to decision making that attempts to take into account different perspectives and opinions.

Today’s meeting was not just the first meeting for our new Mayor, but also the first meeting for our new City Council – all 44 members who represent the City just as much as Mayor Ford.  Those 44 Councillors represent a wide variety of opinions, reflecting the political diversity of Toronto.  Your comments, at their meeting, with their friends and families present in the room, was incredibly rude.  Or, since you you like to talk like a “straight shooter”, let me just say that you behaved like an asshole.

Usually, I wouldn’t waste my time writing a letter to an asshole.  But you specifically singled out cyclists in your speech.  And that’s a really important issue to me, and I just wanted to share a few thoughts.

3) As someone who comes from a sports background, I would have thought that you’d encourage cycling.  You may have heard that there is a severe lack of exercise amongst our youngest generation and a growing obesity problem.

4) Cycling in Toronto right now is dangerous.  Hundreds of people get injured every year, simply because we haven’t created enough safe spaces to ride in the City.

5) Hundreds of miles of bike lanes have been painted in the last few years, in Manhattan.  Painted by a conservative right-wing mayor who believes in safety for families.  Safety isn’t a left-wing or right-wing issue.  It’s common sense. Only a fool cannot see this.

6) Mayor Ford himself has proposed over 100km of new bike lanes across the City. Good for him. This is exactly what Toronto needs and cyclists are eager to start working with his policy team to make this happen.

Maybe you think that politics should be played like a hockey game.  Two sides, one winner, lots of fighting.  What about compromise?  What about listening to each other?  What about actually thinking about what might be good for the city, rather than just spewing negative immature insults about people who ride bicycles?

I can’t tell you how many times I’ve seen friends injured on the streets of Toronto. I’ve visited them in hospitals, I’ve rushed to emergency rooms and I’ve attended memorials for those who have been killed – simply because our City Council didn’t have the guts to paint a line on the road. And you think it’s funny to mock the politicians who are simply trying to make safer streets for the taxpayers who you claim to ‘respect’?

All cyclists have ever asked for is safety and respect.  They pay taxes, and deserve safe roads just like anyone else.  I hope you never have to experience the loss of a loved one in a bicycle collision.  It would be a horrible way to find out how ignorant your comments were today.

Thanks for writing this letter Mez. I hope Mr. Cherry has the opportunity to read it.