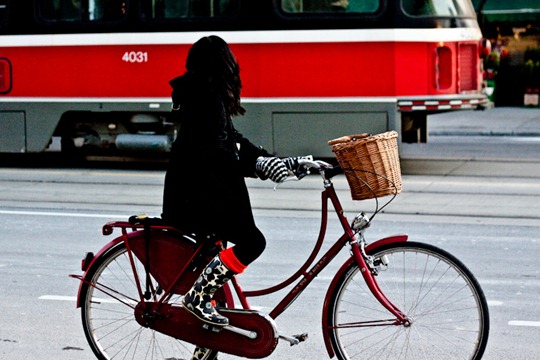 Photo courtesy of Aviva Cohen for The Urban Country

In the face of a new mayor who is intent on removing existing on-street bike lanes in Toronto, more than 19,162 people defy him by riding into downtown core every day.

The number comes from an unprecedented study by the City of Toronto to count the number of bicyclists entering and exiting the downtown core on a typical weekday.

The study also found that 78% of bicycle trips occur between 7AM and 7PM, so we can estimate that the number of bicyclists entering Toronto’s downtown core on that September day would be about 24,567 people.

The new study yields mixed feelings. On one hand, we know that there are *at least* 19,000 people who use bicycles every day for transportation in the downtown core. On the other hand, in a city of 2.5 million people, this represents only 0.77% of Toronto’s total population.

The study found that the College St. bike lane carried by far the greatest volume of cyclists of any road or bike lane in the downtown core.

(I often go a few kilometres out of my way to ride along College street because it’s enjoyable to be around a critical mass of other bicyclists at rush hour – with the bike lane sometimes bursting at its seams.)

Another controversial topic in the Toronto mayoral campaign was the use of major arterial roads by bicyclists. One candidate espoused the view that bicyclists should be relegated to side streets.

The study found the majority of bicyclists entering and exiting the downtown core use major arterial roadways: 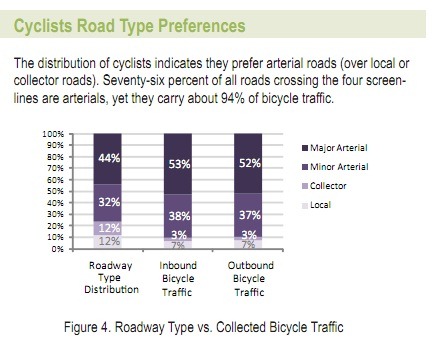 It also confirmed that bicyclists prefer roads with bike lanes: 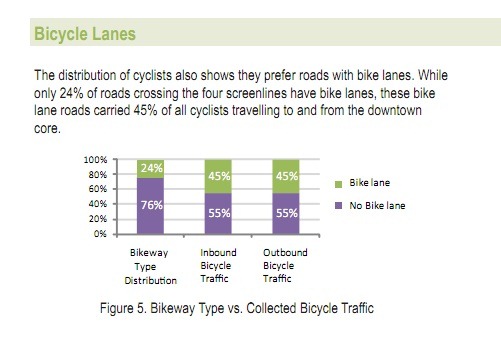 Based on the results, commuters seemed to make up the bulk of the bicycle trips: 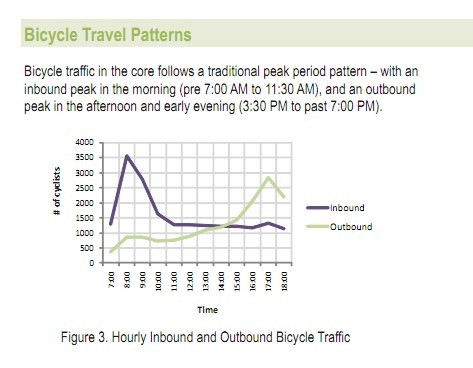 People who ride bicycles in Toronto get a strange feeling while riding in the city. They feel as if there are a lot of other regular people using bicycles for transportation, but they don’t feel the city is doing much for them.

They hear the mainstream media telling them that it is dangerous, politicians tell them that they are “swimming with the sharks” and at the end of the day it’s their own fault if they get killed.

The fringe media writers tells bicyclists that they don’t deserve better infrastructure if they aren’t wearing a helmet. Co-workers tell them they are crazy for riding a bike in the city.

There is constant negativity that every day bicyclists have to deal with.

Yet most of them keep riding on. This is a sign that our urban bicycle culture precedes widespread societal acceptance. Regular people are riding to run their errands, travel to school or work – despite society pushing them towards “safe” automobiles or public transit.

Be part of the revolution, and have fun while you’re at it.

For the full report, please visit the Toronto Cycling website. Hat tip to BikingToronto for posting the study first.