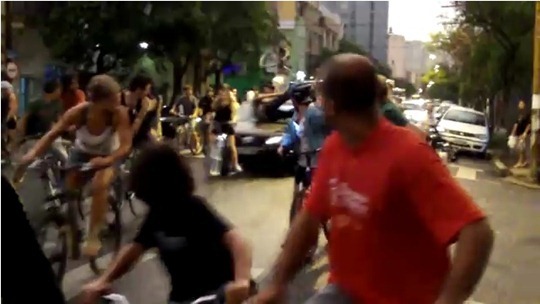 In late February, we covered the terrible Brazil Critical Mass mow-down, where a driver of a Volkswagen Golf indiscriminately plowed through dozens of people on bicycles participating in a Critical Mass ride.

By some miracle nobody was killed in this incident, but at least 17 people were hit by the Volkswagen as the man accelerated through the bicyclists. It wasn’t until several days after we first posted our article before it was finally covered by the international mainstream media.

Close to two months have now passed since this incident occurred. Ricardo José Neis was indicted on 17 counts of attempted murder on March 18th, and was incarcerated on March 31st while he awaits trial.

On April 8th, Neis was granted habeas corpus and was released from prison. His habeas corpus status was granted due to the fact that there was no evidence that Neis had threatened witnesses or victims or destroyed evidence, so holding him behind bars would violate Brazil’s principles of presumption of innocence.

On Sunday, Ricardo Neis gave an exclusive interview to Fantástico News where he talked nervously about what was going on in his mind when he plowed his Volkswagen through a group of more than a hundred men, women and children.

In North America, it would be odd to give an interview while awaiting trial, since it could be used against him in court if he incriminates himself.

We have professionally translated the Portuguese interview below the image for our readers (for our Portuguese-speaking readers, watch the interview here): 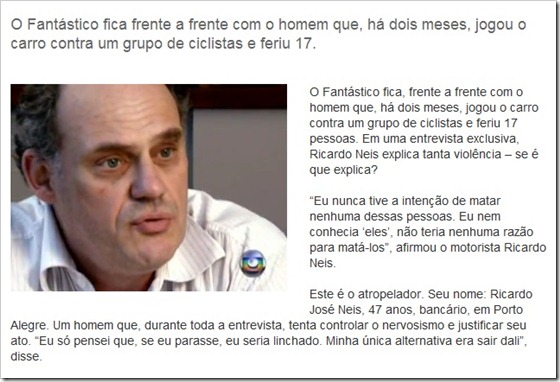 Fantástico: What happened that day?

Neis: That day, I was bringing my son to his mother’s house. It was a Friday and he had spent the entire night with me. He was going to spend the weekend with her. They [Critical Mass] blocked traffic and took over the street there. I stopped the car and some of them threw themselves on top of the hood; others threw a few punches there, right? I became extremely nervous, my son too, so I tried to pacify the situation. I rolled down the window and told them that they didn’t need to do it in that way, because there was room for everyone on the road. When I passed, I saw that they were enraged. So, at that point, they really started attacking the car. They broke the mirror and hit the car hard several times. At that point, my kid and I began to panic and I tried to flee.

Fantástico: But you could not have taken a right or gone down another street, and avoided running over someone?

Neis: If I knew that the attack would get worse, I could have done that before. I acted instinctively and my intention was to get out of there.

Fantástico: But were you angry at that moment?

Neis: No, I was panicking. I was scared. I was afraid.

Fantástico: You could not have avoided the mass trampling?

Fantástico: Would it not have been better to stop the car and ask a police officer for help, trying to divert the situation?

Neis: How? There would be no time, none.

Fantástico: But you could have killed a cyclist…

Fantástico: Did you act out of revenge?

Neis: Absolutely not. I acted on the instinct to escape. You must agree with me that you cannot have a demonstration, or a march in the middle of traffic, right? I think it’s not appropriate.

Fantástico: Do you feel like a monster in traffic?

Fantástico: Are you a calm driver?

Neis: Yes, yes, of course. I react according to the situation. Eventually, of course, I’ve received tickets, but nothing out of the ordinary.

Fantástico: Do you feel any remorse?

Neis: Of course I have thought a lot about it. Of course what you’re asking me, I ask myself often: Did I evaluate the situation correctly at the time? I really think so.

Just to recap, here is a video showing Mr. Neis running down the Critical Mass bicyclists: