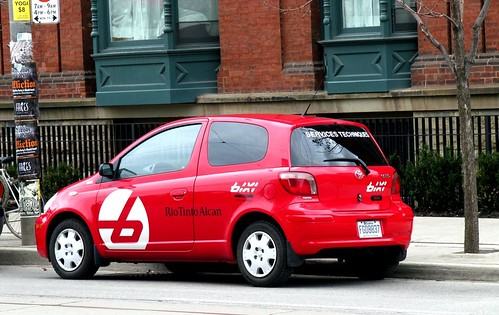 BIXI bike-sharing is scheduled to kick off on May 3rd in Toronto with 1,000 bicycles at 80 stations in the downtown core. BIXI is operated by the Public Bike System Company which is based in Montreal, Quebec.

Public Bike System Company is a privately held company that was founded in 2008, just prior to launching Montreal’s BIXI bike-sharing program in 2009. BIXI later spread to Minneapolis, London, Washington DC, Melbourne, and now Toronto. As a result of the proliferation of BIXI bicycles around the world, the Public Bike System Company has recently announced that they surpassed their net income predictions by more than 40%.

Toronto’s BIXI program will offer memberships for $5 a day, $40 a month, or $95 a year. With a membership, you are free to take a bicycle as often as you please – as long as you return the bicycle to one of the 1,500 docking points at the 80 stations in 30 minutes or less. BIXI is thus intended for short trips, and designed to maximize the number of trips a bicycle can facilitate each day.

This type of bike sharing program is great for public transit users, tourists, train commuters, business people traveling to meetings downtown, or people who live within the service area. Even if you already own a bicycle, BIXI can be convenient for one-way trips and allow you to more easily combine public transit with bicycling.

In 2009, after kayaking from Toronto to Montreal, I tested the BIXI system for several days – pointing out several flaws – many of which have since been fixed. Since that first trial in 2009, I have been intrigued by BIXI and how it can help contribute to shifting our cities to be more comfortable for people on bicycles.

This morning I was delighted to see a BIXI “technical services” car with Quebec license plates briefly parked across the street from my home while the technician bought a coffee. With just over 1 week before BIXI Toronto launches, it’s great to see the technicians in town preparing for the launch. 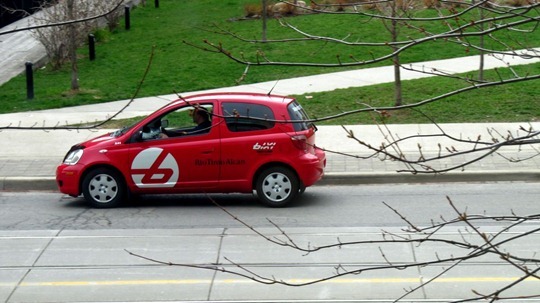 Two weeks ago I visited the head office of the Public Bike System Company in the outskirts of Montreal to find out more about the company. The front-desk clerk handled escalated support calls from various cities where BIXI is operating. Most of her calls seemed to be coming from DC’s Capital Bikeshare program, often answering the phone: “Capital Bikeshare, how can I help you?”.

Given the time zone differences, I was told Melbourne handles their own support calls.

A BIXI employee told me DC’s Capital Bikeshare has been successful since launching last September, though there were a few reported incidents of stations freezing over the winter. Montreal shuts down its bike sharing program from November to April, so DC is the first to test the stations through a snowy winter.

I tested out DC’s Capital Bikeshare shortly after they launched to be disappointed by the lack of stations, but they have added more stations since I tested it out. Like DC’s system, Toronto will also operate year-round. However, Minneapolis closes down for the cold Minnesota winter.

The Public Bike System Company head office is located in an industrial complex near Montreal’s Trudeau airport. I was able to reach the head office by public transit using the subway and transferring to a bus. However, it seemed most people who work here drive to the office: 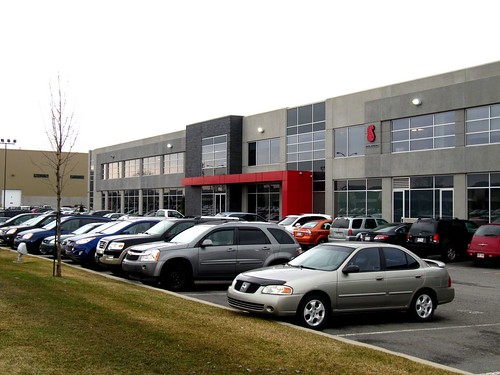 Beside the building is a BIXI bike sharing station with space for 3 BIXI bicycles: 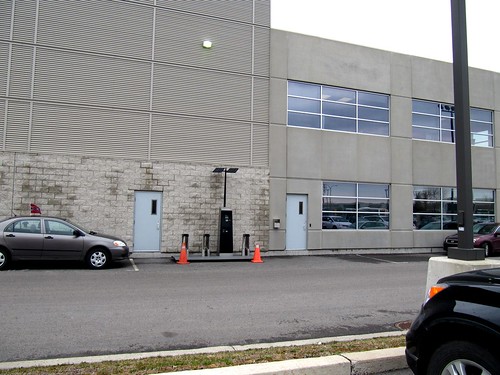 It is hard to say whether this station is actually for usage or if it is placed there simply for temporary storage, but inside the head office you will find another larger docking station which is used to showcase the bicycles and the station to prospective customers: 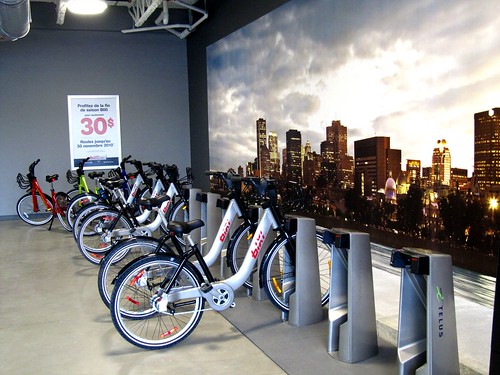 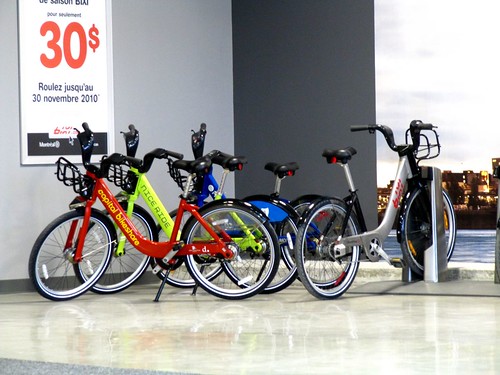 On the other side of the floor, you will find a London Barclay’s Cycle Hire station with a single bicycle on display: 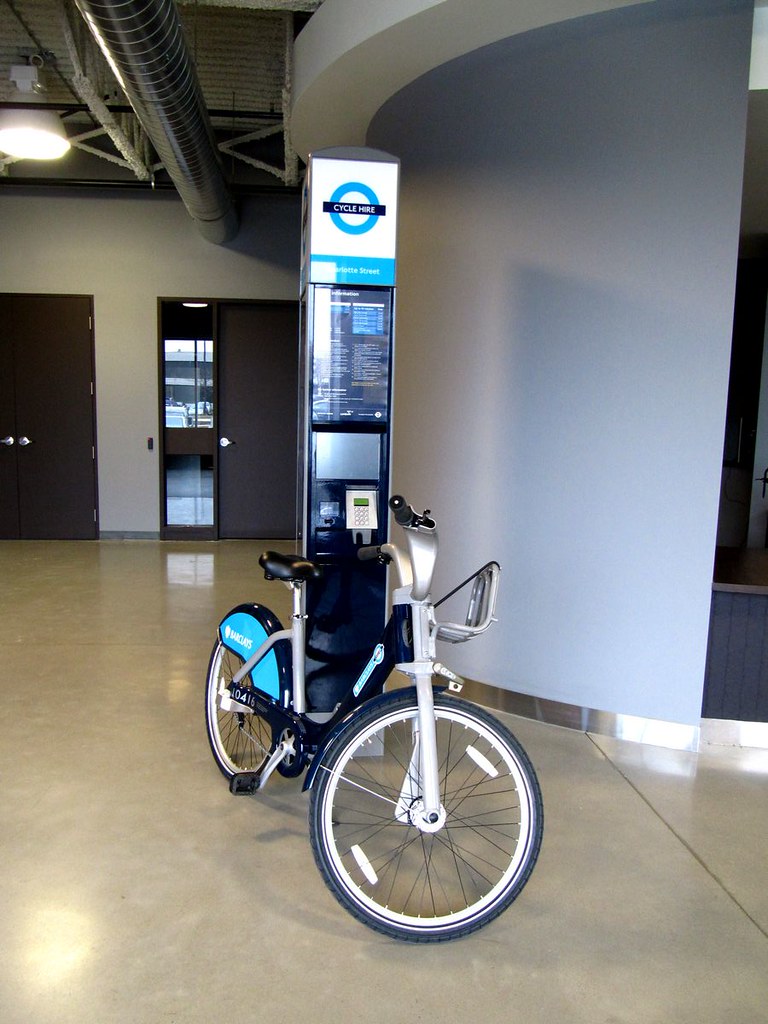 As well as what appears to be a rider on a prototype bicycle, with some photos hanging on the wall in the background: 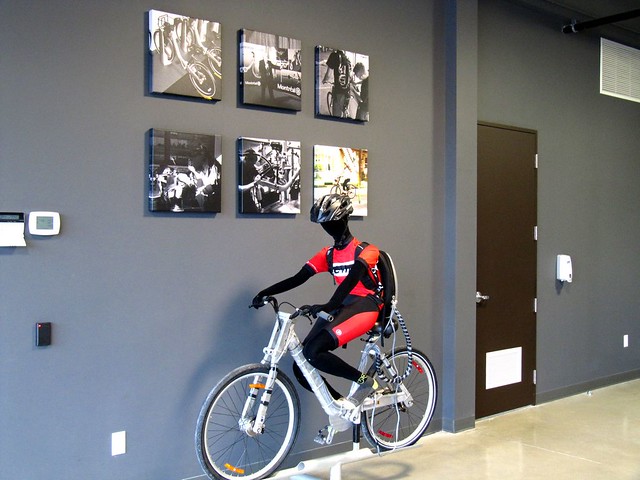 Toronto had originally planned to launch BIXI in 2010 with 3,000 bicycles and 300 stations, but they delayed it by a year and reduced the number of bicycles to 1,000 at 80 stations.

The risk posed in Toronto is that the service area might be too small to make it useful for a wide range of potential users. The potential lack of usage may prevent it from expanding, and thus servicing more riders.

My hope is that BIXI in Toronto will expand incrementally regardless of its initial success due to the potential it has to service vast residential areas just outside of the initial service area.

BIXI told me there are 2 dedicated technicians from Quebec who are working with the City of Toronto to determine where to place the docking stations in the downtown service area. I suspect the photograph I took above is one of those two technicians.

With only one week and two days remaining, Toronto should start seeing docking stations being installed very soon. I have already pre-paid for an annual membership and plan to use BIXI in situations where it is more convenient than bringing my own bike.

24 thoughts on “BIXI Toronto And The Public Bike System Company”