Dutch Cycling Promotion. Good For The Body, Legs & The Eyes. 4 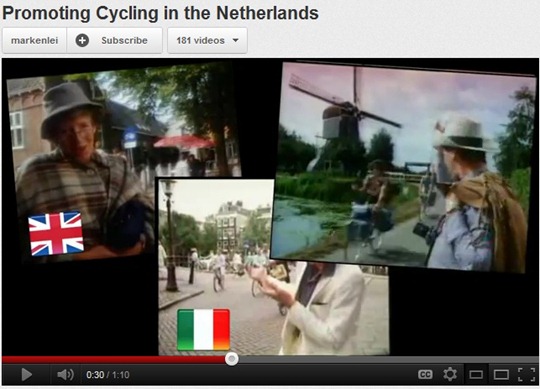 Mark over at Bicycle Dutch has posted some Dutch promotional cycling videos circa 1985. The videos exploit stereotypes, with an English, American and Italian tourist each talking about bicycles in the Netherlands.

Mark points out that “Even in 1985 the Dutch needed foreigners to point out how good it is to cycle in the Netherlands”.

I particularly enjoyed the amusing Italian’s perspective. He closes with this line:

For the full article, check out Mark’s blog Bicycle Dutch.

Speaking of the Netherlands, in just four days I will be arriving in Amsterdam to spend the weekend exploring the city by bicycle (as well as quite possibly drinking some green beer with Marc from Amsterdamize).

4 thoughts on “Dutch Cycling Promotion. Good For The Body, Legs & The Eyes.”