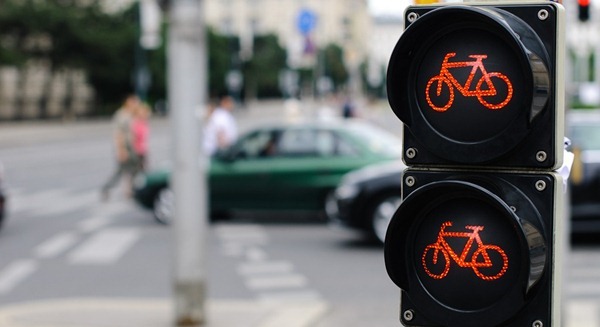 Editor’s note: This is a guest post from Darryl Kotyk. Darryl runs a cycling lifestyle website called lovingthebike.com. Darryl was originally from Canada but is now based in Austin, Texas. We are very pleased that Darryl has offered to provide his perspective on red lights to The Urban Country readers through this guest post.

When the announcement was made in February that Paris, France was going to officially allow cyclists to run red lights, it resulted in a bolt of conversation across the cycling world. This news makes Paris one of the first major cities to allow such a thing, and I have been keeping an eye on it.

The experiment in Paris is limited for now and has been introduced in a small district in north Paris. If there is no recorded rise in the number of collisions, the system will be extended to all 69 areas of the capital where there is a 30km/h speed limit.

Here in North America the red light laws for cyclists differ from state to state and province to province, but no matter where you are located it is a sensitive (and highly opinionated) subject between drivers and bicyclists. Just as there is a difference in laws applying to red lights, there is also a difference of opinion by cyclists and how they feel.

Although we don’t have this same allowance of running red lights as what Paris is testing out, there is definitely no shortage of occurrences where a cyclist rolls on through, or hesitates slightly before going through a red.

There is also the issue of turning right on a red light and the laws again differ on this one as well. For the purposes of this article I am discussing the overall issue of cyclists and red lights, but for more on right turns on red lights be sure to check out a great article by Tom Meyers: What a Red Light Will Cost You.

I think the big question here is why, as cyclists, do some of us feel totally okay with going through a red light when we don’t even think about it while driving a car?

This is a tough subject because the viewpoints of rolling through red lights differ from cyclist to cyclist. But it is safe to say that the majority of us fall into one of two opinions: those totally against it, and those who feel it is sort of a “grey” area.

I’m a bit of a rule breaking kind of guy, so here is my opinion of the whole thing. If I’m out cycling at 7:00AM on a Sunday morning and I come across a red light and can’t see any civilization (cars or anything else) for miles, then I am definitely not going to sit there and wait for the thing to turn green. Basically, I feel that if someone is being smart, safe, and making an educated decision then it’s all good. This applies to red lights and pretty much all things in life….in my opinion.

Many cyclists acknowledge the fact that if they obey the law and rules of the road, then vehicles will respect them. Others feel that it depends on the situation and when traffic is light or non-existent, then slowly rolling through a red is totally fine.

There are also those red light controlled by sensors in the road. Many of them are equipped to pick up the metal in a vehicle and will initiate a green light, but there are some where the sensors do not pick up that a bike is there waiting for the light to change. At times like this, a cyclist really has no other option unless they choose to wait for a vehicle to come along to set off the sensor.

As pointed out by Marc over at Bicycle Dutch, the Dutch have long been accommodating bicyclists at red lights; not by allowing them to pass through red lights per-say, but by building proper bicycle infrastructure that eliminates even having the urge to pass through a red light in the first place. Without requiring any new laws that pertain to red lights.

I thought it would be interesting to get the perspective of a bicycle injury lawyer on this one, so I asked my cycling friend and Chicago bicycle accident lawyer, Jonathan Rosenfeld what he has to say about the red light issue:

“Part of safe bicycling is obeying the traffic signals. In order for cyclists to help improve road safety, they need to show motorists that they are committed to following the signals themselves. By ignoring red lights, bicyclists are not only endangering their own safety, but in many respects they are perpetuating a stigma held my many drivers — that bicyclists are simply out for their own fun.”

Here is what a few cycling friends from Facebook have to say on the whole Red Light issue:

For more comments from cyclists, view the conversation on our Facebook Page.

So what do drivers have to say about this issue? The generally consensus is if cyclists wish to be treated like another vehicle on the road, then they have to follow the same rules and laws that drivers are faced with.

Each time a cyclist is seen blowing through a red light, it sets things off and the red-hot battle between driver and bicyclist is further fuelled. It is definitely the case that a cyclist obeying the law pretty much goes un-noticed, but one rule-breaking rider longingly stays in the minds of drivers.

“Not only is it unsafe for cyclists to disobey the rules of the road, it’s also frustrating to drivers. Not knowing what a cyclist is going to do makes things difficult for everyone.”

“The rules apply to everyone. If a cyclist is riding on the road, they must obey the rules of the road.”

Here is my way of putting the idea of a cyclist going through a red light in a way that might be more understandable to a driver of a vehicle. I would liken this to a driver who uses their cell phone while driving in a place where it has been made illegal. It’s illegal, and very un-safe in my opinion, but many people justify their actions and continue to do this each and every day. To drivers like this, they feel that under the circumstances they are not doing anything wrong. It’s the same thing with bicyclists and red lights.

In a perfect world, cyclists would have their own roads through proper bike infrastructure. But in reality, we all need to find a way to share the road and keep the peace. Let’s see how this Paris idea turns out and take things from there.

Darryl Kotyk runs a cycling lifestyle website called www.lovingthebike.com. At Loving the Bike they believe in living life to the fullest….on and off the Bike, and very much enjoy being a part of the incredible community of cyclists around the world.

22 thoughts on “Bicycles and Red Lights”