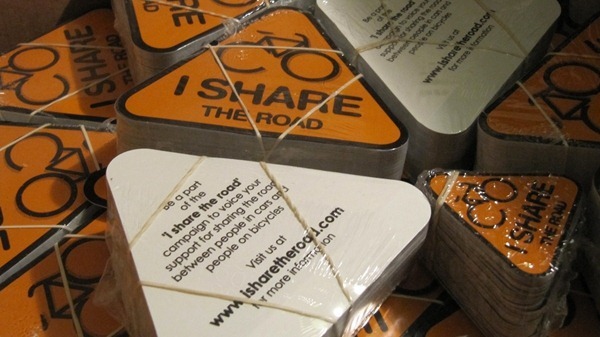 Just over a year ago, we officially launched our ‘i share the road’ sticker campaign. The idea first hatched when a friend of mine expressed his interest in showing his support for bicyclists by placing a sticker on his car. I thought it was a great idea and we worked together to select a sticker design and a message to promote.

After some discussions, we ended up choosing the following simple wording to promote the campaign: “Be a part of the ‘i share the road’ campaign to voice your support for sharing the road between people in cars and people on bicycles”. This phrase is printed on the back of each of the 25,000+ stickers that have been printed so far.

The message is not meant to be political or divisive. It is a simple message that attempts to promote civility on our streets.

Last October, after the campaign was launched, I wrote this:

Too many advocacy campaigns take an ‘us versus them’ approach. But whether you ride a bicycle or drive a car, we all use the same streets and having a divisive attitude is beneficial to neither drivers nor bicyclists.

We have now sent out more than 16,000 stickers around the world, and thanks to the generous donations we have received, we have donated thousands of these stickers to help spread the campaign.

In fact, just today I donated $200 worth of stickers to the AutoShare car sharing service here in Toronto. My goal is to have the entire AutoShare fleet of cars outfitted with our sticker to further promote the message around the city.

I am always happy to hear about the stickers being spotted by friends, family and acquaintances, but recently there was a ‘sticker spotting’ by a friend that, to me, truly illustrates the success of this campaign’s ability to reach across the entire spectrum.

Our sticker was spotted on a car in Toronto with a US Army veteran license plate from New Mexico: 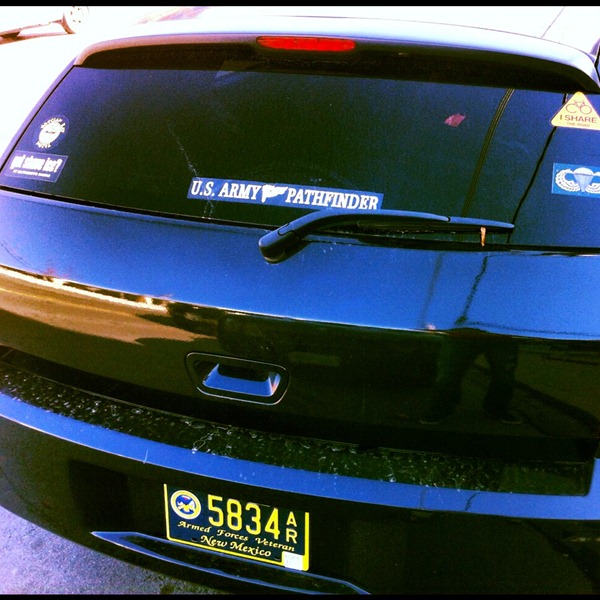 Sharing our streets is not a matter of left vs. right, nor is riding a bicycle. Bicycling is just a fun/quick way to get around a city, regardless of one’s political views.

Great cities that promote civility between all road users, and ones that build great infrastructure for both cars and bicycles, are enjoyed by people across the political and social spectrum. Civility on our streets benefits all of us, and that is what this campaign hopes to achieve.

2 thoughts on “‘i share the road’ Campaign, One Year Later”