How To Win Over Non-Cyclists at a Dinner Party 18 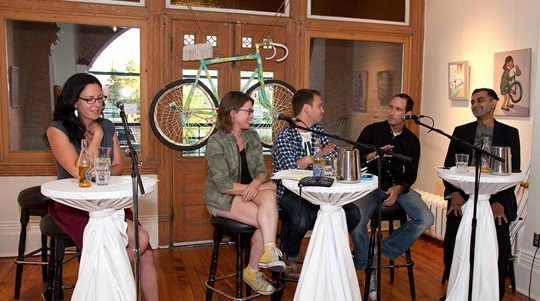 Last Wednesday I participated in a panel discussion for the Toronto Bicycle Film Festival. The title of the panel discussion was: “Building Bridges: How to tell good stories and win over non-cyclists at a dinner party”.

The premise of the discussion was interesting because we have all encountered non-cyclists who get us worked up when we aren’t able to get through to them when we express our point of view.

The discussion was moderated by Yvonne Bambrick, the former Executive Director of the Toronto Cyclists Union and now an Urban Cycling Consultant. In addition to myself, there were 3 other panellists who participated: Tammy Thorne (Editor in Chief, Dandyhorse Magazine), Dave Meslin (Founder, Toronto Cyclists Union), Shamez Amlani (Co-founder, Streets Are For People).

The discussion surfaced some ideas about how we can more effectively communicate with non-cyclists to share the benefits of bicycle transportation.

Each panellist was asked two questions before the floor was opened for questions/comments from the audience. The first question was:

Can you recall a time when you realized that how you were discussing or presenting “benefits of cycling transportation” was falling on deaf ears – when you could tell the person you were speaking to had stopped listening? What argument were you using? What have you noticed as ‘turn offs’ in this type of conversation?

And the second question:

Is there a particular moment that stands out of a time when you remember seeing a ‘lightbulb’ moment when in conversation with someone about this same topic… A time when you realized and felt that your points were having the intended effect and that you were really changing this person’s mind about the value of cycling transportation? What point were you making?

There were some very interesting and helpful points made by both the panellists and audience members. Tammy Thorne discussed the importance of keeping your cool when confronting a motorist and explaining to them in a nice way that they almost hit you.

Dave Meslin mentioned some common arguments used by motorists who argue against bike lanes (e.g. Why do you need a bike lane when you can bike three blocks to the next street with bike lanes?), to which he would ask the motorist why do we need car lanes on a particular street when they can drive a few blocks to another street.

Shamez discussed how preaching to non-cyclists is not an effective way to win them over (something which he says he has been guilty of in the past). He also mentioned that his world travels have left him inspired to make Toronto a better city for people instead of just catering to cars. 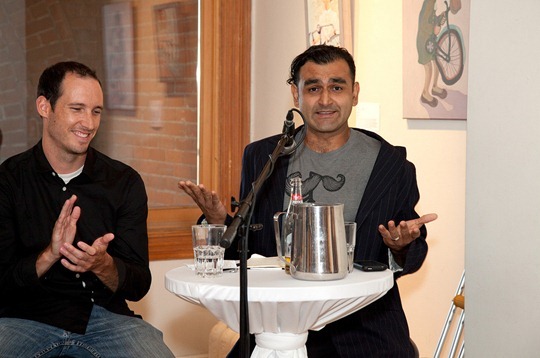 I highlighted how talking about sustainability and environmental issues taints the conversation and some people won’t listen to anything else you say.

I also mentioned a “lightbulb” moment that I experienced when I recently opened a civil, respectful dialog with a newspaper columnist who had written anti-cyclist rhetoric in a popular newspaper.

By engaging the columnist in a civil way, I was able to share my side of the story which led to him subsequently publish my point of view in his newspaper column.

I was also touched by his confession that he has personal reasons for showing the “cyclist” side of the story because his 11-year-old son has recently discovered the freedom of using a bicycle for transportation, so he worries about his safety.

Since the panel discussion catered to the “already converted” cycling advocates, we printed some flyers to help provide guidance to advocates trying to promote the benefits of bicycle transportation.

Most cyclists are also drivers, and most drivers are potential cyclists. Dividing and alienating a particular group of road users will not improve conditions for anyone, so it’s important to be civil and try to empathize with the other people we are sharing our streets with.

Otherwise the message will fall on deaf ears and bicycling will continue to be viewed as merely a recreational activity instead of an effective and pragmatic means of transportation.