Yesterday’s triathlon was a lot of fun. When I showed up at the starting line, my friend Tim was there with his girlfriend. I had no idea he was coming; he had been planning this since the first day I announced that I had entered this triathlon on my website. Tim reminds me of an Al Qaida terrorist. He plans carefully, well in advance, has patience, doesn’t reveal his plan or drop many hints and when you least expect it he shocks you. It worked out well though because I was there by myself, so it was nice to have some company.

The race was a lot more difficult than I expected it to be, but I made it through the finish line and that’s all the matters to me. The swim didn’t turn out too badly. I used the technique that I feel comfortable with by keeping my head above the water even though it’s not as efficient as swimming with my head under water. But I got through it and my time could have been much worse. The cycling was the one thing that I lost a lot of time in. It was a pretty windy day, and we were against the wind and uphill for a lot of the route. I think the results of the race reflect this because the winner this year was more than 15 minutes slower than the winner last year. So I assume the cycle route they did last year was a bit easier. I’m also going to look into buying a used road bike, because I’d be peddling my ass off and people on road bikes would go flying by my twice as fast. Tim and I were 2 of the very few people who used mountain bikes. At least 90% of the competetors had road bikes.

After I got off my bicycle and started running, my legs felt like they had 20 pounds of bricks attached to each of them. It was probably the most difficult run I’d ever done, and my running time was about 6 minutes above what it should be in a normal race. (Without biking and swimming). But I was still happy with my running time anyway. Our age was written on the back of our legs, so every time you went by someone you could tell how old they were. Near the end of the race I passed a 79 year old man. If I can do a triathlon at 79 I would be extremely happy. I have a lot of respect for that man.

Here are our official times:

and some action photos from the race: 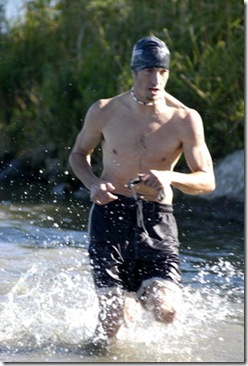 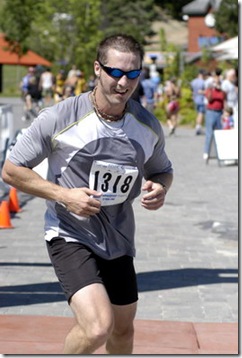 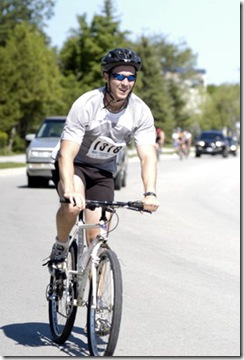 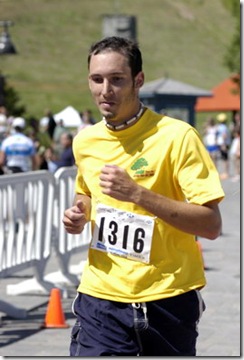 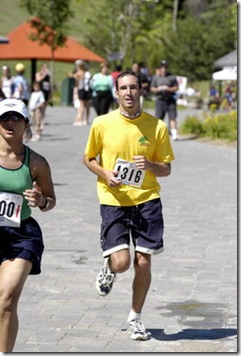 3 thoughts on “My first triathlon”