The 4-man Olympic-style K4 boat gets off to a good start against the 1-man Hydrofoil “Flyak”. It doesn’t take long however for the Flyak to burst ahead of the 4-man boat at a speed of 27 KM/hour to win the 200M race.

The Flyak starts out like a regular kayak, but once the paddler reaches a certain speed, the hydrofoils kick in, the hull is raised above the water, and has the ability to reach an amazing level of speed.

With the hydrofoils fully engaged, the boat has very little drag and is almost “flying” above the water. The boat was first designed by Norwegian world champion sprint-canoer Einar Rasmussen and Olympic canoe contender Peter Ribe in Norway in 2005.

Hydrofoil technology has a long history, dating back to 1899 when British boat designer Sir John Isaac Thornycroft began his design of prototypes which came to fruition in 1909 in the form of a 22-foot boat “Miranda III”.

Alexander Graham Bell also had an interest in hydrofoil technology when he worked with engineer Casey Baldwin to develop working models of hydroplane watercraft based on a model by Italian inventor Enrico Forlanini (Casey Baldwin is also credited to be the first Canadian to pilot an aircraft). They achieved a world marine speed record on September 9, 1919 with a speed of 114KM/h which stood for 10 full years. 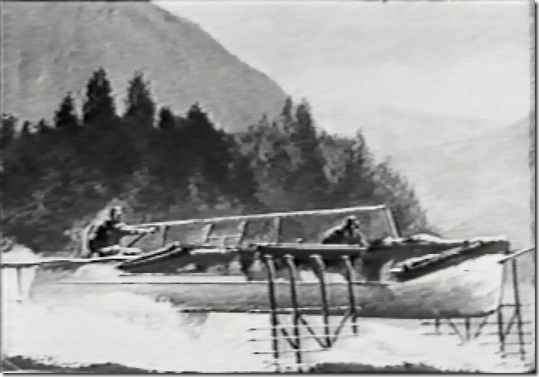 At 27KM/h I could have reached my destination in 2 hours as opposed to 8-10 hours during last summer’s kayak adventure. This is pretty amazing technology, though something tells me it will be a long time yet before this type of boat would be feasible for your average kayaker to use.