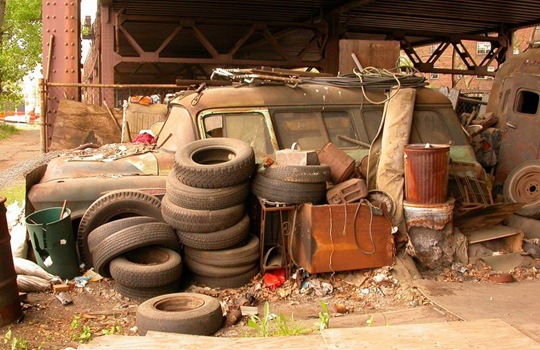 The Urban Country explores whether purchasing second-hand products can help save ourselves, our society, and the world as we know it.

In a speech yesterday to a special summit on climate change at the United Nations, President Obama claimed that fighting climate change is more difficult during the recession: “We seek sweeping but necessary change in the midst of a global recession, where every nation’s most immediate priority is reviving their economy and putting their people back to work”.

I respectfully disagree with the President. The recession provides an opportunity for us as consumers to assess our needs and look at ways to reduce our consumption – if for no other reason than to cut down our expenses in difficult economic times.

It’s no coincidence that the world’s wealthiest nations have the largest ecological footprints and consume the most resources from the earth. If you take away some of that wealth (recession), the natural result would be less consumption.

The US Government is in a strong position to help stimulate the economy by investing in “Green Technology” – a pledge that Obama had made prior to the election last November and was enacted in the form of a (very progressive) stimulus bill that was signed on February 17th.

At the UN summit, China ‘stole the show’, flaunting its $100 billion+ stimulus package dedicated to clean energy. The US isn’t far behind however – Obama’s stimulus bill commits at least $78 billion toward green initiatives. The absence of Stephen Harper only affirms Harper’s indifference to environmental initiatives.

Government investment in green initiatives makes a great story, but addressing these tough challenges in a difficult economy isn’t only the government’s obligation. There’s much more that can be done on an individual level to address climate change and our deteriorating environment.

Here in North America, the success of Craigslist has most definitely had a substantial impact on reducing and diverting waste from landfills – a possible unintentional side-effect of an otherwise conventional business venture.

Within a few hours I can easily find a buyer who would be thrilled to take a product from me that I no longer need – at a fair price. Likewise, I can find a second-hand product that I’m looking for – with very little effort – as an alternative to contributing to the overconsumption that has plagued our society.

Think about a product’s lifecycle: it starts out as raw materials that are extracted from the earth before being manufactured into a useful product. The product is then shipped (typically overseas) to a satellite distribution warehouse before being shipped to a retail store.

Each stage in the development and distribution of the product uses a substantial amount of energy and resources. But it’s not over yet – at the end of its useful life that product is either shipped to a landfill or down-cycled into a lesser-quality product – consuming even more energy.

As we grind through a difficult economy, we should be asking ourselves whether we really need to engage in the consumerism that society prescribes us. A second-hand product usually has more character than a new product and it can give you comfort in knowing that not only did you save some money – but you also helped reduce the impact on our precious planet.

2 thoughts on “Second-Hand Secret to Sustainability?”