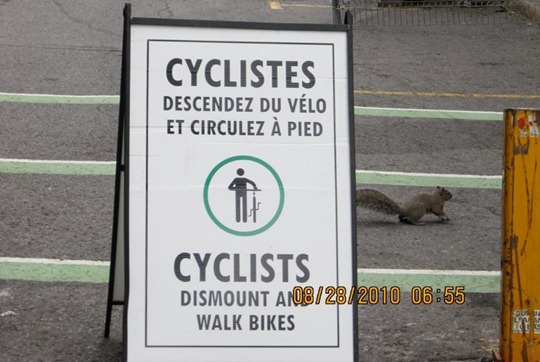 Trying to make sense of the phenomenon of pedestrians’ fear of bicycles in North America.

In May 2010, McGill University in downtown Montreal became a car-free pedestrian-only zone. The eradication of automobiles on the school campus was a great step forward, but like most progress in North America it also resulted in a step back, because along with the automobile ban came a campus-wide ban of bicycles.

Shortly after banning automobiles, the University initiated its “walk bike” campaign aimed at students who use bicycles on the campus to force them to dismount and walk their bicycles as soon as they reach the campus entrance.

Perhaps those students at Berkeley who are dinged with $220 fines for not locking their bikes to a bike rack don’t have it so bad after all. I mean, at least they can ride their bicycles on campus.

When McGill first initiated its bicycle ban, security personnel were stationed at each entrance to the campus to ensure bicyclists dismount when entering the campus.

According to its website, the University has since reduced its security personnel to a single guard – but re-assures us that the lack of security doesn’t mean they have abandoned their ban on bicycles.

However, I’m told by one University insider that the bicycle ban hasn’t been very successful, so the University is now looking for ways to use infrastructure to “discourage or slow down” bicyclists on campus.

This is a sign that the university is beginning to acknowledge that a ban on bicycles on a University campus is futile. Like it or not, a bicycle is the more efficient way to get around a university campus, and banning them is like banning beer from being served at the local pub.

The University cites “pedestrian safety” as the reason for banning bicycles from the campus. In its online FAQ, the university concludes that pedestrians and mounted cyclists *can’t* safely co-exist on campus:

A: McGill has had a number of pedestrian injuries reported in recent years due to collisions with cyclists. Once pedestrians become accustomed to the reduced amount of vehicular traffic on campus, we believe the risk of such injuries would increase, should cyclists be permitted to circulate as in the past. McGill’s primary concern is safety for all.

Being thoroughly fascinated by this phenomenon that we have in North America whereby pedestrians have an inane fear of bicyclists, I decided to look at another country where bicycles are very popular to see if McGill’s “belief” that the risk of injuries would increase with more bicycles and less cars.

If this were true, then surely the Netherlands must have Emergency Rooms full of severely injured pedestrians due to the amount of bicycle traffic and lack of automobile traffic in downtown zones.

How can you possibly avoid a collision when there are so many bicycles?

So I reached out to David Hembrow from A View From the Cycle Path – a British ex-pat living in Assen, Netherlands to find out how vulnerable pedestrians in the Netherlands are able to survive with so many dangerous 50lb bicycles buzzing around. Here is part of David’s response:

One of the first things I noticed here (in the Netherlands) was that people are not scared of bikes. I don’t know how it is in Canada, but in the UK if you ride a bicycle close to a family with small children, the parents are likely to protectively grab their child while giving you a steely stare for causing such “danger”. It’s quite an odd response, but they do it.

Here it doesn’t happen at all. Everyone is familiar with bikes, there’s nothing odd about them, and no-one gets unduly upset. A cyclist is always expected not to collide with a pedestrian. However, having said that, pedestrians are expected to look before stepping onto a cycle path.

From the sounds of it, Canada is not far off the UK. I actually chuckle a bit when I ride slowly and cautiously past a pedestrian – almost at walking speed – only to receive this death stare that David speaks of.

To this day, I still can’t understand where this fear of bicyclists comes from. There must be a crazy bandit bicyclist terrorizing pedestrians in our city when I’m sleeping, because I have yet to encounter him.

Sure, I see the odd bicyclist on the sidewalk going faster than they should be near pedestrians, but I have never seen anyone get injured by a bicyclist. Pedestrians always have the right-of-way.

On the other hand, I see pedestrians almost hit several times *every single day* by automobiles (usually turning right on a red traffic signal). In fact, close to 200 pedestrians have been killed by motor vehicles in Toronto in the same time frame that a single pedestrian was killed by a bicyclist.

For those who claim that injuries are common from bicycle-on-pedestrian collisions, I’d like to see hospital admittance statistics on this.

I have a hard time believing that this fear for bicyclists is anything but irrational and unsubstantiated. 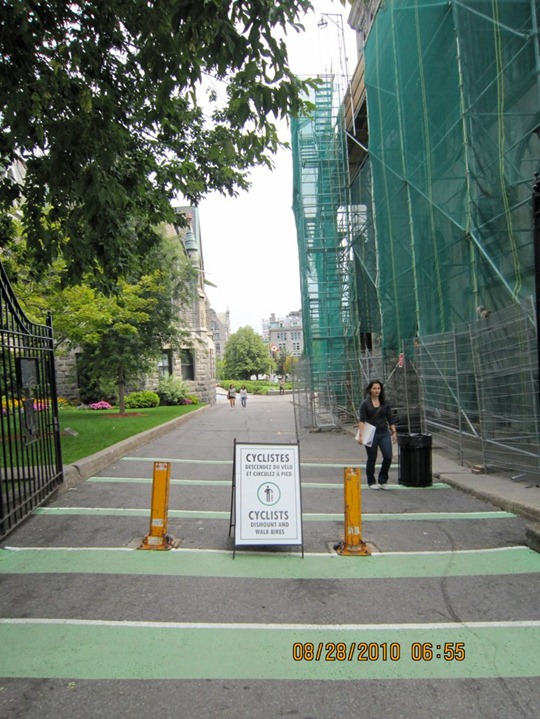 I reached out to an acquaintance who works as a transportation planner for the City of Montreal to see what his thoughts were on the McGill ban:

“The bike ban on the McGill is a drag but less of a drag than it would have been had a protected bike path not been built – with McGill’s backing on University, which is the eastern border to the campus.”

It’s certainly true that the protected bike path on Rue University helps to discourage bicyclists from using McGill University as a thoroughfare to downtown, but still doesn’t solve the issue of students transporting themselves around the campus.

And I think that’s where we have it wrong in North America. Instead of building a thoroughfare for bicyclists to keep bicycles separated from pedestrians, we instead take the “easy path” and ban bicycles completely.

Give bicyclists a proper place to ride, and they will use it.

Making bicycling illegal is not the solution, and it’s quite sad that we are discouraging students from using bicycle. This is our future generation and we are telling them riding a bicycle is bad.

This can only result in an increase in these “bandit” bicyclists that are apparently terrorizing pedestrians.

These bandit terrorists are probably riding as fast as they can to get away from the security guards who are chasing them off the school campus.