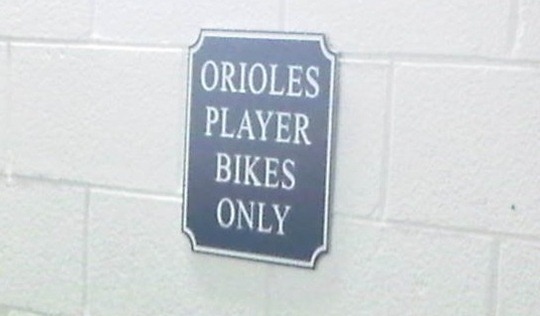 Part of my visit to Baltimore this week included dinner and a tour of Oriole Park at Camden Yards – the home of the professional baseball team the Baltimore Orioles. While touring the baseball stadium, I was pleasantly surprised to see a bicycle rack just outside the players’ dressing room with a sign reading “Orioles Player Bikes Only”.

I asked our passionate tour guide whether any of the players actually use that bike rack. He told me that Baltimore Orioles pitcher Jeremy Guthrie rides his bicycle to every home game.

For someone who received a salary of $5.7 million dollars in 2011, it is great to see Mr. Guthrie choosing not to drive a luxury SUV or sports car to the stadium like most other multi-millionaire professional athletes. 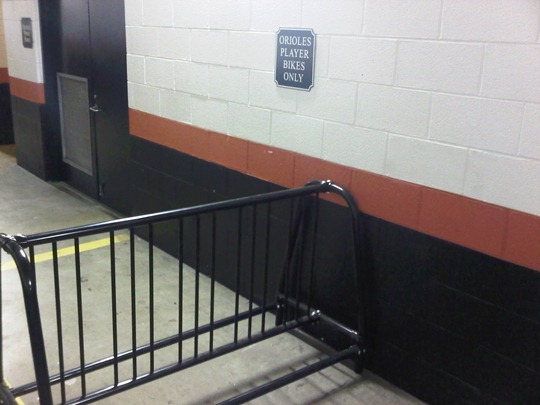 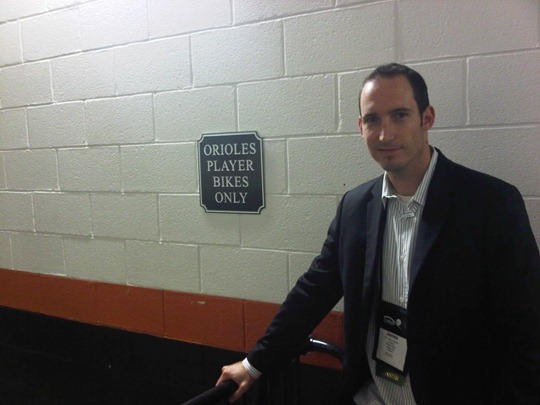 According to a 2008 article by Richard Mason The Baltimore Sun wrote this about the Orioles players’ disposition to commuting by bicycle:

“It seems as if half the Orioles team gets around on two wheels and a handlebar. The Orioles might be the only team that has more use for a bike rack than a bat rack.”

The quote didn’t mention how many players on average ride their bikes to their home games, but it did mention Guthrie’s dedication to riding 6 days a week:

“Fans are accustomed to the players’ lot being filled with expensive rides – sports cars, HUVs, private jets. But you should check out the clubhouse sometime, or the weight room. There are enough bikes parked there to hold the Tour de France.

Jeremy Guthrie rides to Camden Yards six days a week during long homestands. The exception is Sundays, when his wife drops him off after they attend church in the morning. He has maintained that routine at every level of professional baseball, including his days at Triple-A Buffalo, when the trip covered 10 miles. But it was a one-way journey. His wife would pick up Guthrie and the bike for the ride home.

In a 2011 video interview with USAToday, Guthrie explains how he changed perceptions with his teammates:

Thanks Jeremy for representing us well, and I hope many of your fans will follow your lead!