Baby On Board: A Desperate Plea 21 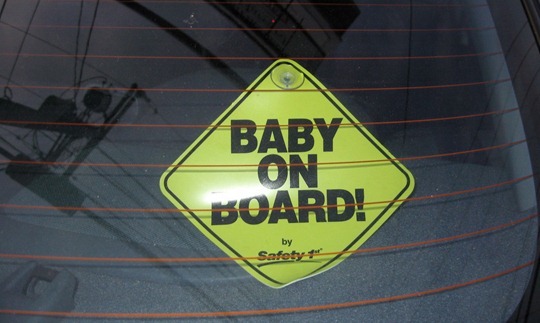 Photo by Steve and Sara Emry

Driving in North America has reached such a low level of selfishness and entitlement that many parents with young children in their car have succumbed to a desperate plea for safety for their children by erecting a “BABY ON BOARD” sign in their car.

I view these signs as a kinder way of saying “Don’t be such a selfish, entitled jerk and have some respect for the human beings whose lives you are putting in danger by driving your car like a maniac”.

These signs are probably effective because they are a constant reminder of how vulnerable children are in cars. They also add a bit of humanity behind the steel and glass boxes that are so inhumane on the outside.

Sometimes we are wont to forget that inside every car is the child of a mother and a father. An uncle, or an aunt, or a sister or friend or a daughter or a son. And in this case a baby is on board – the most precious and vulnerable of all humans.

I first came to the realization that babies can have a calming effect on traffic a couple years ago when I bought a chariot for my bicycle. At that time I had not yet been a father, so I used the chariot for groceries, transporting miscellaneous goods, or for taking my dog on long trips. 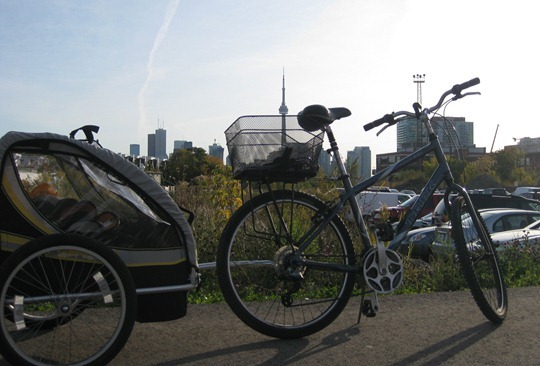 I took notice immediately to the effect that the chariot was having on drivers around me. Drivers would provide me significantly more space when they passed, and would curiously slow down before safely and comfortably passing me.

They had of course mistakenly thought that there was a baby in my chariot – but the result was nevertheless a far more pleasant and safe experience.

This caused me to feel both sad and delighted. Delighted that drivers can still be aware, cautious and respectful of more more vulnerable road users. Sad that it took a baby (or the perception of a baby) to bring out this heightened awareness and courteousness.

I am now approaching the two-month point of my trip here in China. I am out on the streets every single day on my bicycle. Sometimes I am sharing the streets with cars, other times I am riding on physically separated bike infrastructure.

I do love my home city Toronto, but hardly a day would go by without cars passing me uncomfortably close – particularly during the evening rush hour when getting home to dinner is more important than another human’s safety and comfort for the office “nine-to-five” car commuters.

Bicycling in Toronto is still safer than a lot of other activities (likely including driving a car on a highway), and while roughly 3 people are killed each year in Toronto on bicycles, 440 people die prematurely from vehicle pollution in Toronto. Many more hundreds also die and acquire diseases from sedentary lifestyles – of which our car dependence is a significant contributor.

Putting it into perspective, in my 9.5 years of living in Toronto, I have never been knocked off my bike (yes, I made sure to knock on wood).

But the lack of perception of safety and feeling of comfort is one of the most important barriers we need to overcome to encourage more people to use a bike in the city.

Sometimes getting squeezed by a driver is all it takes to convince a new cyclist to call it quits and reducing themselves to sardines squeezed inside public transit, or worse yet, adding one more car to the streets and increasing traffic congestion and pollution.

At least riding on public transit feels safer than being exposed on our streets.

But we need to change this by building better infrastructure and changing the negative perception about cycling to make it more comfortable for all humans who ride bicycles– whether they have a “baby on board” or not.

Here is a 2011 video I made of a pleasant bike commute in Toronto (in high speed):

21 thoughts on “Baby On Board: A Desperate Plea”