10 Observations About Bicycling in Amsterdam 43 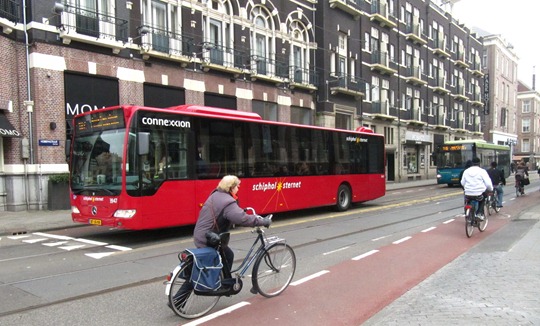 While visiting Amsterdam on my recent trip to Europe, I made some observations about cycling around the Dutch capital. Here are my top ten observations:

10. The locals have little patience for tourists walking on the cycle path 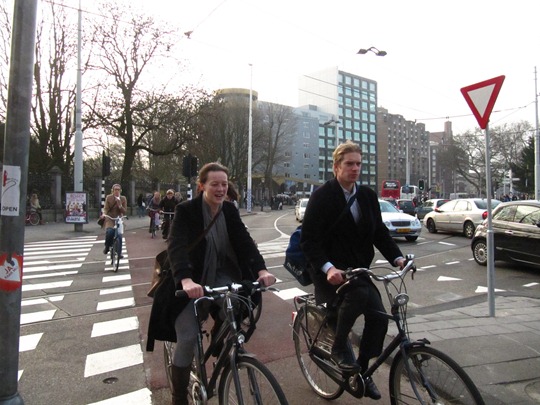 The locals of Amsterdam would like their sacred cycle paths to be treated like roads, not like sidewalks. Rightfully so, they fought hard to get those cycle paths, so they aren’t about to let pedestrians take them over.

Thus, if you are a wandering tourist and you don’t look before stepping on the cycle path, you will most likely get a dirty look, a bell, or a comment from a passing cyclist.

9. Nobody wears helmets or neon vests 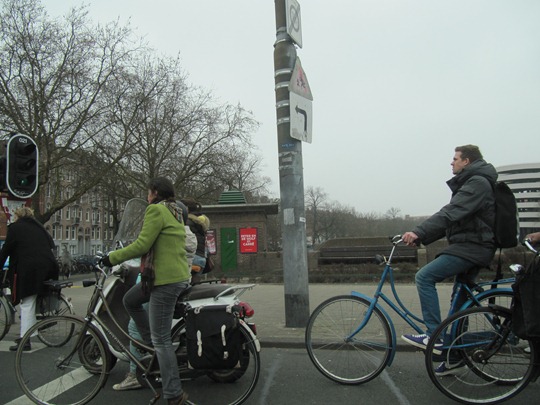 This is an obvious one, but worth re-iterating. Cycling in Amsterdam feels safe enough that people don’t feel compelled to wear helmets or neon vests.

The only exception to this is the odd cyclist out on a training ride. These cyclists do exist, but I only spotted about two or three of these compared to the thousands of children and adults riding in regular clothes and helmet-free.

If helmets and “cycle clothing” were a pre-requisite to cycling in Amsterdam, there certainly wouldn’t be as many cyclists in Amsterdam. Amsterdam cyclists dress for the destination, not the journey.

8. Marc from Amsterdamize is a good tour guide 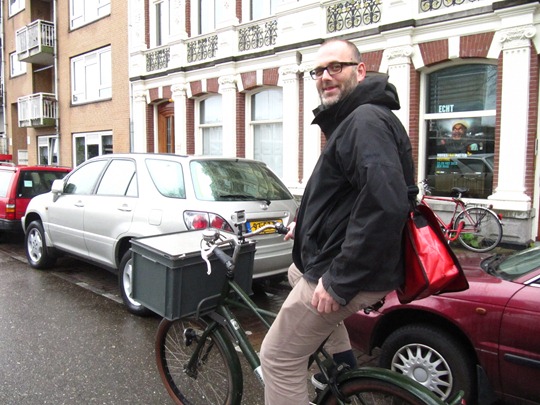 Marc from Amsterdamize – photo by James Schwartz / The Urban Country

Our friend Marc from Amsterdamize took my wife and I out on a Sunday morning for what I called the “Amsterdam hangover bike tour”.

Indeed, the tour was enjoyable, and it included a skinny bridge, a windmill and delicious Dutch apple pie… 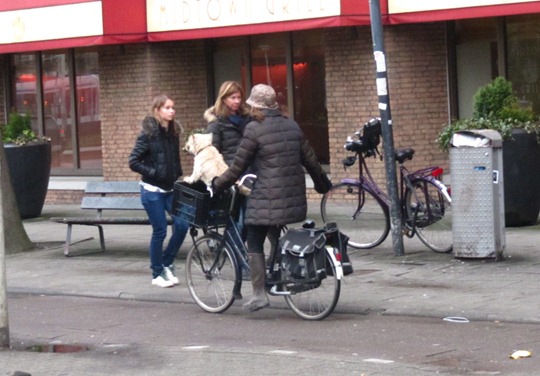 Hand signals are part of the riding etiquette that most cyclists seem to follow in Amsterdam. There is also an expectation from other cyclists that you will keep clear of the cycle path if you are waiting at an intersection, allowing other cyclists to proceed unimpeded.

The common sense etiquette that appears in Amsterdam helps ensure riding in Amsterdam is smooth and conflict-free.

6. Age Is Not An Important Consideration 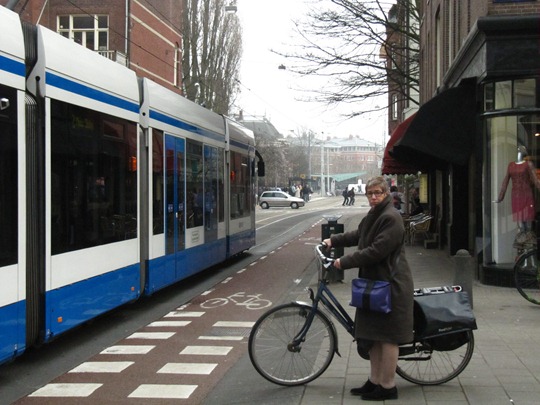 Woman in Amsterdam – photo by James Schwartz / The Urban Country

In Amsterdam, age doesn’t seem to be an important criterion for determining whether to use a bicycle or not. There are young children, elderly folks, and everyone in between who ride bicycles in Amsterdam. 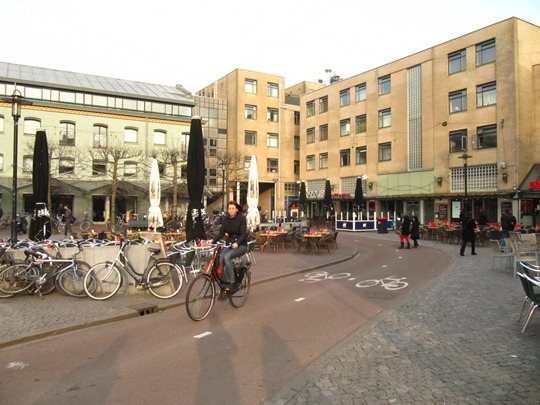 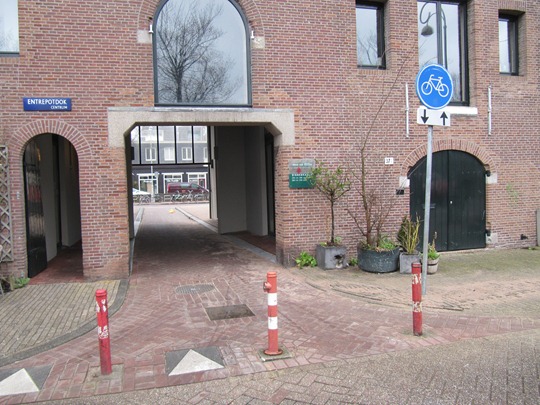 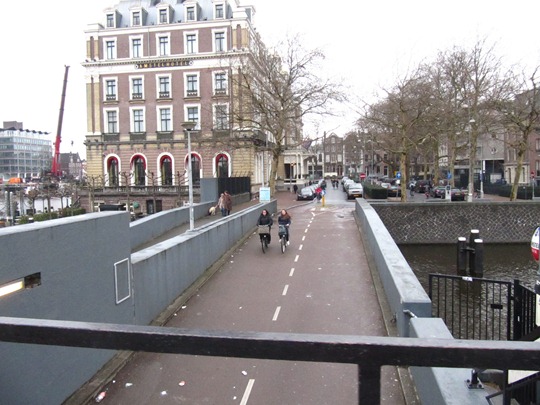 In Amsterdam, cyclists and pedestrians are often granted direct routes that are inaccessible to cars. There are countless examples of these direct routes all over the city which help ensure that cycling is the most convenient mode of transportation in Amsterdam.

4. Not all streets allow passage for cars 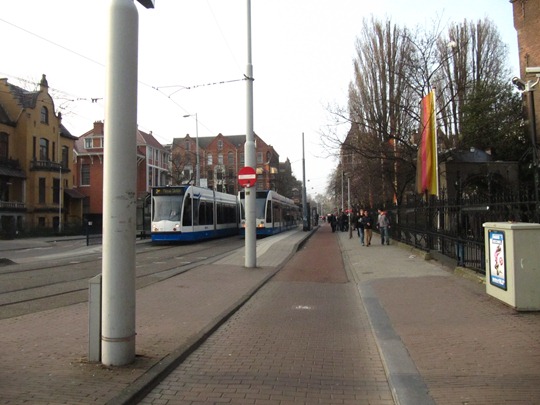 Streets that don’t allow cars are often important arterial roads for bicycles and public transit, and are often popular tourist destinations too. People naturally gravitate to car-free areas. The air smells better, it is quieter and safer.

Having said that, not all streets need to be car-free. Cars are important too, but Amsterdam seems to have a nice balance of streets that allow cars and streets that don’t.

3. No Dutch bike is built for just one person 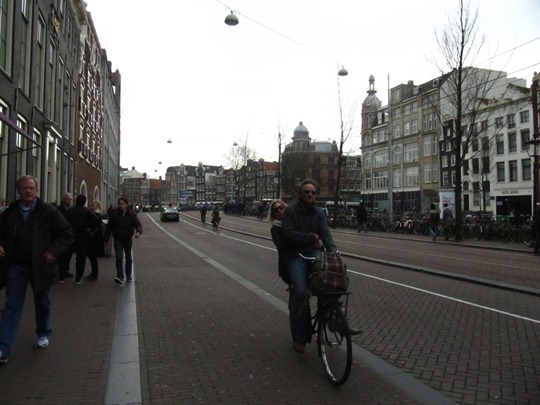 In Amsterdam it is a common sight to see two or more people on a single bicycle. Adult passengers often do the “side saddle hop”, while young children most often use child seats or ride on cargo bikes.

Watch this instructional video from Amsterdamize on how to do the side saddle hop.

2. Talking on the phone or walking your dog while cycling is O.K. 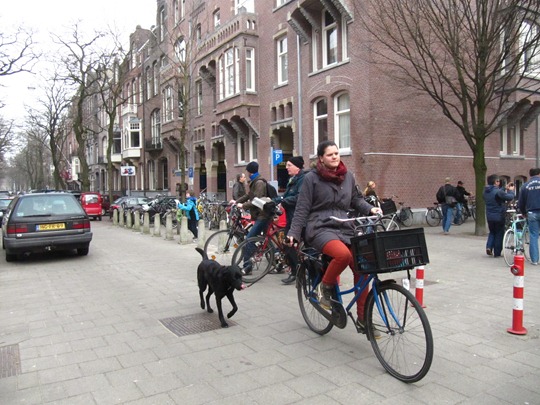 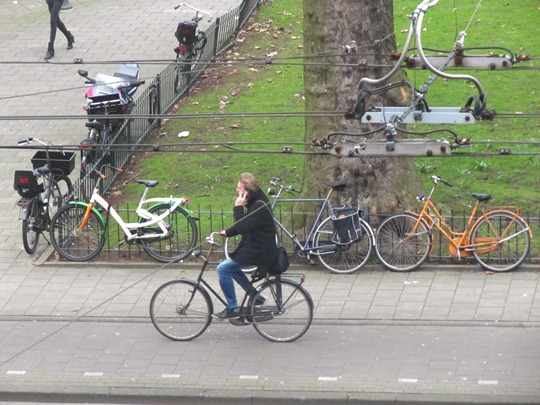 In Amsterdam, talking on your phone while cycling is not frowned upon.

Unlike talking on your phone inside a car, doing it while cycling does not put people’s lives in danger. Especially when you ride cautiously like most cyclists who talk on their phones do in Amsterdam. 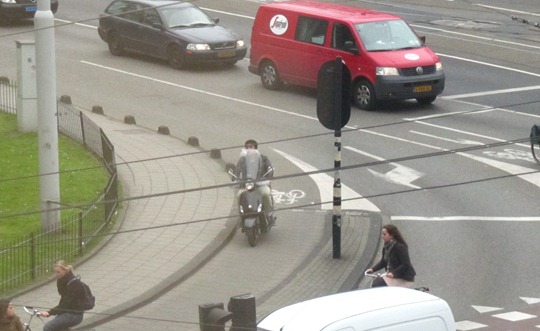 Those smelly, loud, two-stroke scooters are all over Europe – especially in Italy where they seem to “own the streets”.

But nowhere are these machines more annoying than when they fly along the cycle path in Amsterdam at 40km/h dodging cyclists by mere centimetres.

43 thoughts on “10 Observations About Bicycling in Amsterdam”