A Renewed Faith in Newspapers 8 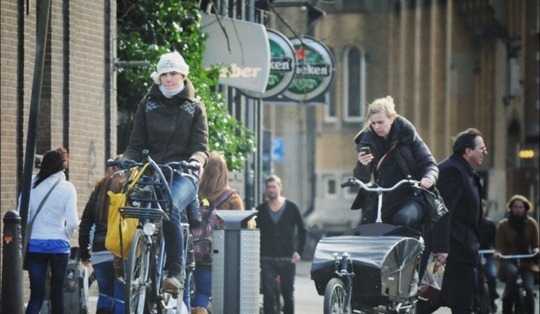 “Places To Go, People To Meet, Things To Do” by Amsterdamize (via ratemyvelo.com)

Over the years as a citizen bicycling advocate I have lost my faith in the media. I had found that news outlets have a bias toward car culture that has contributed to the animosity on our streets and the stifling of progress in improving our cities.

I have pointed out that the media overuses the term “accident” and underuses the term “collision” to describe car crashes. Prior to the term “accident” being adopted to describe car crashes, an accident was described as “an event that happens unexpectedly” or “an undesirable or unfortunate happening”. It implies that there wasn’t much the driver could do – the crash was unfortunate and unexpected. This view cultivates a lack of responsibility and accountability on our streets and contributes to making the situation worse.

I believe the words “collision” or “crash” more aptly describes a car crash. Most car crashes are not unexpected and they are usually avoidable. If you are driving far too fast on slippery snowy roads, crashing your car is not unexpected. If you run a red light you can expect that there might be consequences. Yet the media still uses the term “accident” to describe these often avoidable and predictable collisions where drivers are often negligent or careless.

I have also pointed out that the media overreacts when a cyclist kills a pedestrian (which happens once every 5 or so years in Toronto), and underreacts when a driver kills a pedestrian or a cyclist (which happens many dozen times each year). It isn’t news if it happens regularly, so the dozens of pedestrians who are killed each year in Toronto are considered acceptable as collateral damage to our car culture.

The media also has a tendency to overreact at cyclists who break the rules, while being silent about the fact that the vast majority of drivers regularly exceed the speed limit. The reaction and outrage in the media should be proportional to the amount of potential damage that can be caused.

Thus the media should be far more outraged when an SUV exceeds the speed limit on a city street than when a cyclist safely crosses a red light at an empty intersection – putting nobody in danger (an act which has long been legal in the Netherlands, and is now being tested in Paris).

Having said all of the above, my faith in newspapers is starting to become renewed. I will highlight a few examples of things that have been happening with Canada’s largest newspaper, the Toronto Star.

Most importantly, but not directly related to bicycling – the Toronto Star has been uncovering a series of scandals at a government institution called ORNGE, Ontario’s not-for-profit air ambulance service. This has made me realize how important it is to support newspapers financially in order to dedicate the resources required to uncover and investigate these types of abuses within the government (I am now a proud paying subscriber to the newspaper through my Kobo e-reader).

Secondly, the Toronto Star has been adopting the words “collision” and “crash” recently over the term “accident”. I can’t say if this has become policy in the newsroom, but I have taken notice to it.

Thirdly, the Toronto Star has started to slowly balance out its car coverage in its “Wheels” section by creating a more balanced perspective on bicycling. Here are a few articles that I was involved with to promote a more balanced view of cycling – thanks to the efforts of Toronto Star journalist Jack Lakey – known as “The Fixer”:

And here are a couple letters to the Editor related to bicycling that were published recently, which helped spark this article topic:

I particularly enjoyed that last letter to the editor from Torontonian Douglas Moore, so I will share it here:

But we have to recognize that increased surface traffic congestion is not some naturally occuring phenomenon, and there are a variety of ways to deal with this unintended phenomenon.

To state the obvious, again: our public space has come to be dominated by rolling and roaring machines that were once a novel addition to the street scene. Pause at a downtown street corner during morning rush hour, watch the river of metal and exhaust flow by, and see that the majority of cars carry a single occupant. Such a big hard machine to move one little soft human around. The natural human footprint of two shoe-soles increased to some 40 square feet?

The transit debates going on in Toronto right now are precisely about updating the urban enviroment in keeping with the full range of human needs — from simple health and wellbeing, to universal mobility and safety, to natural beauty.

We are in the midst of an historic rethinking and reshaping of what life can be in a city. We can make this city less of a machine and more of a home.

So let’s continue to move forward with widely accessible, cost-efficient public transit. Let’s get serious about the bicycle as a central and pleasureable part of contemporary urban transit — real bike lanes, rather than “bike paint,” must be established part of the plan.

Let’s include truly generous, dignifying outdoor pedestrian walkways in the vibrant commercial and entertainment areas of the city. And for every highrise condo that goes up, the inhabitants need an area of thoughtfully designed greenspace.

Let’s stop living in a stunted, polluted past.

Here is a link to this letter on the Toronto Star website.

The small changes that are beginning to happen at Toronto’s largest newspaper are a positive sign of greater things to come.

I hope you are all starting to see changes in your local newspapers as bicycles start to become a more widely accepted tool for transporting ourselves around our cities, and help to re-shape our cities into more desirable places to be.

8 thoughts on “A Renewed Faith in Newspapers”