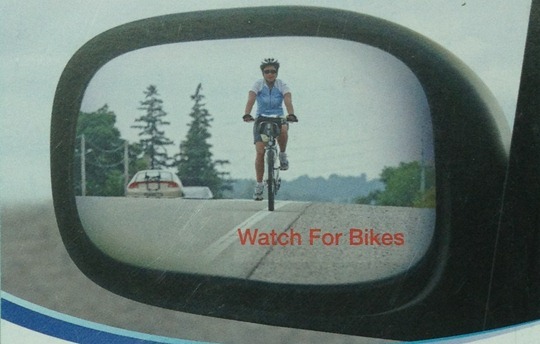 In lieu of proper bike infrastructure, how can drivers and cyclists better co-exist on our streets? This is a question that is pondered frequently on this website and was the basis for our ‘i share the road’ campaign.

An annual initiative called “Watch For Bikes” also attempts to address this by encouraging safe driving and bicycling. The initiative was created by a partnership between the Canadian Automobile Association and the City of Toronto.

The campaign includes a handout with a sticker that is affixed to the driver’s side mirror with the text “Watch For Bikes”.

From the “Watch For Bikes” handout:

When you are driving

Remember to check carefully for cyclists approaching from behind before opening your vehicle door. The fine for opening a door into a cyclists’s path is $110 and two demerit points.

When you are cycling

As a general rule, ride about one metre (three feet) away from the curb or parked vehicles in an urban environment. This makes it easier to avoid potholes, debris, vehicle doors and makes you more visible to the people around you. Always wear appropriate safety gear and ride with traffic.

The CAA has historically been on the wrong side of the discussion as it has generally promoted the proliferation of car culture and some of its initiatives actually encourage Canadians to drive more.

However, the “Watch For Bikes” initiatives promotes safe driving and cycling and provides some much-needed bicycle education and awareness for Canadian drivers that is lacking in the current government driver education programs and exams.

Sure, they could have chosen a better photo of a “citizen cyclist” for their handout, but they seem to have the right intentions with this initiative.

From the back-side of the “Watch For Bikes” handout:

When you make good decisions while you are driving or cycling, you will keep yourself and everyone else around you safe, too.

Also, think about the environment and use your bicycle for short trips.

In addition to its “Watch For Bikes” campaign, the CAA has also recently initiated a program to provide roadside assistance for bicycles – with the option to transport your bicycle up to 320km if the problem can’t be fixed on the spot.

The CAA also hosted a conference in Vancouver on May 25th, 2011 called “Changing Lanes” which provided a much needed discussion about “how bikes and cars can better co-exist on Canada’s roads”.

These initiatives by an “automobile” club highlight the seismic changes we are seeing in Canada as citizens are becoming more aware of the benefits of bicycle transportation over driving.

4 thoughts on “Watch For Bikes Initiative”