How Bicycles Can Boost Commerce 5 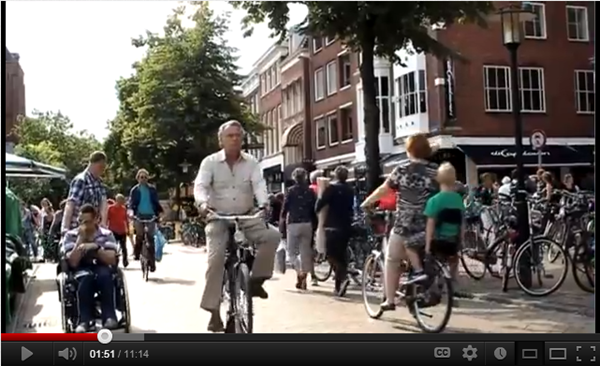 My filmmaker friend Mike Rubbo over in Australia has put together a nice film about shopping by bike. In his film, Rubbo uncovers the opportunities that bicycles present to small businesses.

Rubbo talks to shoppers and merchants about shopping by bike, and at the end of the film makes a pitch to a Chamber of Commerce President about reaching out to constituents to make their businesses more bike-friendly.

“When you are on a bike, it’s so easy to stop. You might smell bread, and you stop. You see a shop you want to go into. You see a sign that you wouldn’t be able to read from a car. And it makes you stop. A street display, books on the sidewalk, or something. You’re in the thick of commerce. You’re a hunter gatherer.

Now cars of course do a good job of bringing business to regional shopping centers, whereas bikes are like sprinklers; they water the whole commercial garden.”

Michael Rubbo divides his bike advocacy time  between making movies and bike art which can be found at www.situp-bike-art.com

Quick stops along the way

Mike’s film is very timely. A few weeks ago Yvonne Bambrick and I submitted a proposal to deliver a session at a BIA conference in 2013 to show how businesses can benefit from accommodating shoppers who arrive by bike.

And just the other week when Yvonne and I were showing Mikael Colville-Andersen around Toronto, I was thinking to myself how convenient it is to make quick and frequent stops at stores while on a bicycle.

Mikael needed to stop at a pharmacy to grab a homeopathic product that isn’t as readily available back home in Copenhagen. So we pulled up to the front door of the pharmacy and Mikael was in and out in a couple minutes.

Throughout the day we made many random stops in shops and restaurants. Had we been driving, we would have wasted 10-15 minutes to park the car each time. Had we been using transit, we would have been constantly waiting for the next bus, streetcar, or subway.

On a bike, you just hop on and off as you please. 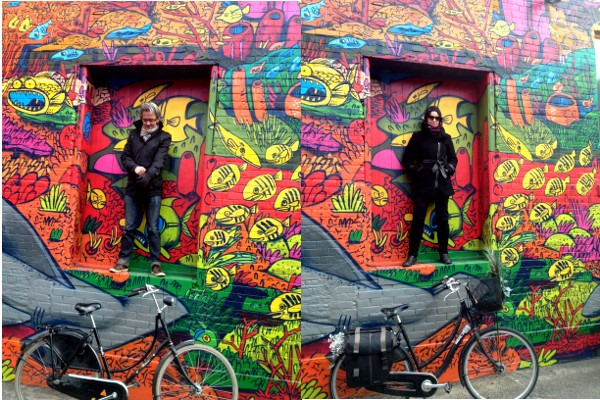 “This market was all about bike traffic”

In the film, Rubbo describes an epiphany he had while watching video footage from a market the Netherlands:

“This market was all about bike traffic. About shoppers who do obviously small purchase runs. Probably do them frequently, rather than perhaps going into a car to a supermarket.

It made me think that we could make a case that in Europe, markets and small shops probably depend for their very existence on bike traffic.”

As Rubbo points out in the film, there is a great opportunity for small businesses to become more bike friendly.

My vision for the future of my city does not include a large Wal Mart Superstore surrounded by a giant parking lot.

My ideal city has a small bakery nearby. It has family owned restaurants; markets where I can buy my fruits and vegetables. A family owned hardware store, perhaps. A local deli. A friendly butcher. And a cycle track I can ride up on.

Here in Toronto, many of the most  bike-friendly streets are also the most bustling and vibrant streets in the city. The streets that were turned into urban highways are often lacking commerce.

The challenge is to convince small business owners that widening sidewalks and implementing bicycle facilities can actually help their business. The common perception that drivers are the ones who are spending the money is ingrained in our minds.

People who arrive by bike visit more and spend more

The study found that 4 out of 5 people surveyed do not usually drive to the area. It also found that people who arrive by transit, foot and bicycle visit more often and spend more money than those who drive.

Just ask any business on Broadway in New York if closing 7 blocks of the street to cars had a negative impact on their business. The pedestrian plaza on Broadway draws thousands more people to the area than when it was an urban highway with pedestrians spilling over the edge of the sidewalk.

Sure, it might take drivers an extra minute to get around the pedestrian plaza, but the world didn’t end, and now New York is better off as a result. It was a small sacrifice with a very large payoff.

Investing in customers who arrive by bicycle is good for business. Period.

If you haven’t already, watch Mike Rubbo’s film on YouTube and leave a comment on here with your thoughts on how small businesses can better accommodate shoppers who arrive by bike.

5 thoughts on “How Bicycles Can Boost Commerce”