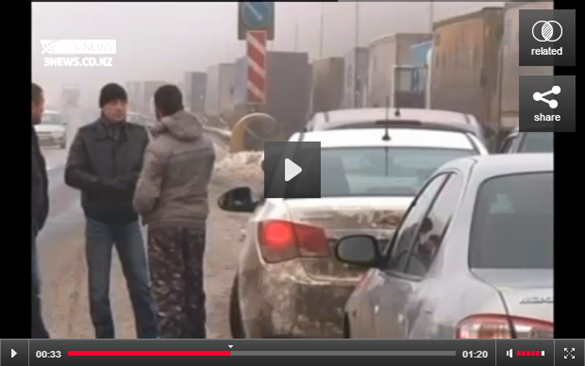 Photo from video provided by 3news.co.nz

In Russia, a 200KM mega traffic jam has stranded drivers for several days. The backlog on this highway that runs between Moscow and St. Petersberg was intensified by heavy snow last week.

“A 125-mile long queue of vehicles spanned the roadway, which connects Moscow and St. Petersburg. Traffic moved at a stop-and-go pace, with the main obstruction centered about 30 miles northwest of Tver, less than a quarter of the distance between the two cities.

“Drivers stranded by the three-day-long traffic jam complained that authorities weren’t offering enough assistance and that businesses close to the highway were taking advantage of them. Restaurants reportedly increased their prices, and gas stations ran out of fuel, according to social networking site Vkontakte and a Tver news website.

The Emergencies Ministry soon arrived on the scene to distribute food and set up warming stations, RIA Novosti reported. The division also established a support hotline to help distressed individuals deal with the standstill. Emergencies Minister Vladimir Puchkov took a helicopter tour of Tver, Leningrad and Novgorod, which were the most impeded areas.”

On the traffic jam in China, we wrote:

“For several decades, the Chinese managed to transport millions and millions of people efficiently around their cities – primarily by bicycle. There are reportedly 450 million bicycles in China, and the bicycle has served as a great tool historically.

The traffic jam has stranded mostly truck drivers for reportedly 9 days, and many are playing cards to pass the time.”