Cause of Road Congestion: Too Many Cars 15 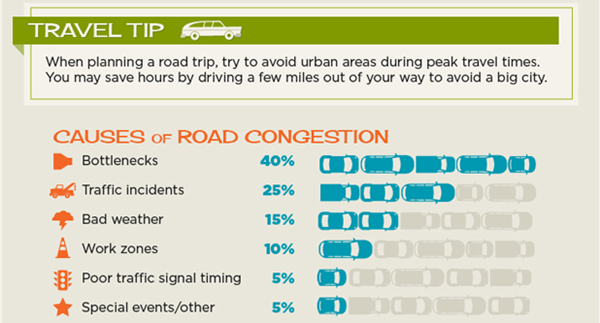 Infographic from a large US auto insurance company

In Beijing, by the end of 2010 there were almost 5 million cars on the streets of that city of 20 million people (the 26th largest city in China by population). In 2010 alone there were over 800,000 new cars that were registered in Beijing.

Near the end 2010, the Beijing government realized that there wasn’t enough surface area in the city to sustain close to a million new cars year-after-year, so they decided to address traffic congestion by limiting the number of new license plates to 240,000/year using a lottery system.

In the first 11-hours after making this announcement they received 40,000 online applications.

Like many of our cities in North America, traffic congestion in Beijing is caused by too many cars on the road. There is no other explanation for it.

In the United States there are 812 cars for every 1,000 men, women and children.

The Beijing government seems to grasp the notion that too many cars causes congestion and in addition to restricting the number of license plates, the city lowered the cost to ride the subway to about $0.35USD and committed to doubling the length of its 15-line subway network by 2015.

The true cause of traffic congestion seems to be largely ignored here in North America. We are always trying to blame something exogenous for traffic congestion. It is always the fault of someone else and our society is averse to take ownership for issues that we ourselves cause.

This is illustrated by an infographic on traffic congestion that was sent to me recently. I get a lot of spam through this blog from people trying to promote their brands, but I thought it would be worthwhile to show this one because it highlights how ingrained car culture really is.

The infographic begins by detailing some interesting statistics about driving. For example, it explains that the US collectively drives about 3 trillion miles annually, or that the public roads in the US stretch 4 million miles – long enough to circle the earth 160 times.

Although the infographic contains some interesting information, it makes nary a mention of public transportation or bicycles. This despite the fact that the marketing firm that sent me the infographic wrote “Maybe some of these facts will convert more people over to using a bicycle for transportation!!”

The infographic then goes on to list “Causes of Road Congestion” as the following:

Thankfully, the infographic didn’t list “bicyclists” as one of the causes of road congestion, and I am happy that they used the words “traffic incidents” rather than the misnomer “traffic accidents”.

Perhaps I shouldn’t be surprised that a major American insurance company wouldn’t mention anything that might encourage its own customers to use any other mode of transportation than their car.

Perhaps I should pull out Photoshop and tweak their infographic to remove the reality distortion and include some pragmatic suggestions to solve the tough problem of traffic congestion.

Here is the infographic in its entirety:

15 thoughts on “Cause of Road Congestion: Too Many Cars”