Should Distracted Bicycling Be Banned? Umm, No. 4 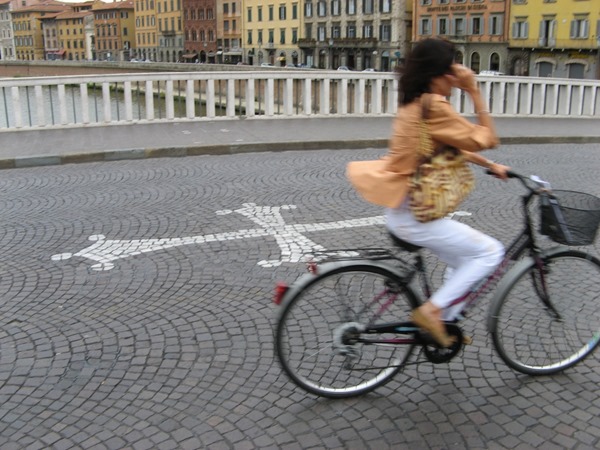 A bicyclist talking on her cell phone – Photo courtesy of otzberg

The Atlantic City’s Eric Jaffe asks whether distracted bicycling should be banned:

“Whether you’re for or against distracted cycling rules — more on that in a moment — you can’t deny that using a cell phone changes the way a person rides a bike.”

Jaffe notes that the study found that bicyclists ride at a slower speed when a phone is involved, but they also swerve more:

“In every case where a phone was involved, bicycle speed was reduced compared to riders who weren’t engaged in a secondary task. “Lateral position variation” — the technical term for veering or swerving — also increased when cyclists were on their phones. Cyclists on phones also detected fewer signs planted along the bike route. Riders using touch screens generally fared worse than those on conventional phones.”

But why are we trying to solve something that isn’t a real problem? Jaffe presents no evidence to suggest that distracted bicycling is actually a danger to our society. So why are we even talking about it?

On the other hand, in a 2011 article, we made the proposition that distracted/wobbly bicyclists may actually have a calming effect on traffic:

“A cyclist who was riding in the bike lane was swerving somewhat erratically (he was probably swerving to avoid a pothole or a sewer on this particular street). She slowed her car down immediately to about 35km/h and moved a bit over to the left to safely pass the “erratic” cyclist.

Instead of creating more barriers and disincentives for people to use bicycles for transportation, why not invest in fixing what is broken, and encouraging people to ride safely?

Here are a few suggestions that we have for measures that will actually improve safety on our streets:

Reduce the speed limit on streets that are shared with cyclists

In the end, Jaffe seems to agree, looking at the cost-benefits of enforcing distracted bicycling versus building safe bike infrastructure:

“As cycling gains in popularity, more cities will have to confront the question of whether or not to ban distracted riding. But before they do, especially in these fiscally challenged times, it’s worth weighing the cost of enforcing the law against that of protecting the public in other ways — namely, creating safer bike infrastructure. One may discourage unsafe behavior from a few riders, sure. The other will encourage safe riding for everyone.”

4 thoughts on “Should Distracted Bicycling Be Banned? Umm, No.”