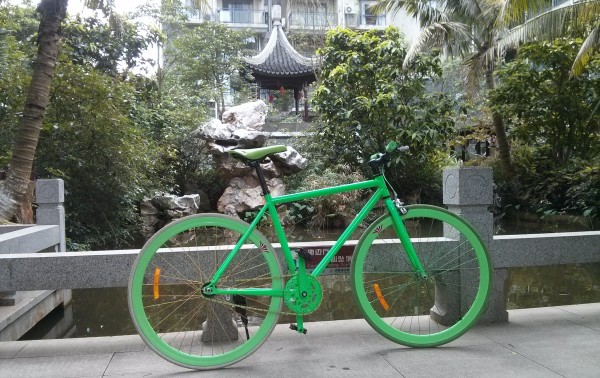 Wow. It has been an inexcusable amount of time since I last wrote an article on here. For the past two and a half months I have been living overseas in the southern most part of China (Hainan Island).

I have been keeping very busy between spending my days outside with my daughter, and working all night to align with the time zone back in Toronto. This has left me very little free time to keep up to date on the news/blogs, or to write new articles on The Urban Country (not to mention the Internet connection here is excruciatingly painful to use most of the time) . However, my time in China is winding down, so I am planning to get back into a somewhat regular routine.

While living in China my bicycle has of course been my primary mode of transportation for getting around the city. For the first part of the trip I was riding a tiny Giant folding bike that I purchased two years ago when I last visited China. Halfway through my trip I picked up a used bright green fixed gear bike and later added a child seat on it for my daughter. She has been riding with me every day since, and we have both been loving it.

A recent rant on Craigslist that was brought to my attention afforded me the realization that road rage has been noticeably absent from my life while living in China. What was a daily regular occurrence in Toronto – drivers who were visibly angry at somebody else on the road – has not occurred even once for me in over two months in China.

The streets in Chinese cities – which would otherwise appear chaotic to anyone from North America – flow smoothly and I have yet to encounter an angry driver or have a close call here. As long as you pay attention to what is in front of you, riding here is far more comfortable than getting squeezed by cars on roads that lack proper bicycle infrastructure back home.

I had all but forgotten about the animosity that I would see every day on the streets back home. It just doesn’t exist here and it is certainly something that I took for granted during my time in China. But soon I will return back home where road rage and bicycle/car animosity is simply part of the culture.

The ‘i share the road’ sticker campaign that I started in 2011 would be unnecessary in this Chinese city. Everybody shares the road here without resentment toward other road users.

Stay tuned for some photos of the interesting child seats that I purchased on Taobao (the Chinese version of Amazon) and installed on my bikes here in China to allow my daughter to explore the city with me.

ames D. Schwartz is the Editor of The Urban Country and is based in Toronto, Canada. You can contact James at james.schwartz@theurbancountry.com or follow him on Twitter.