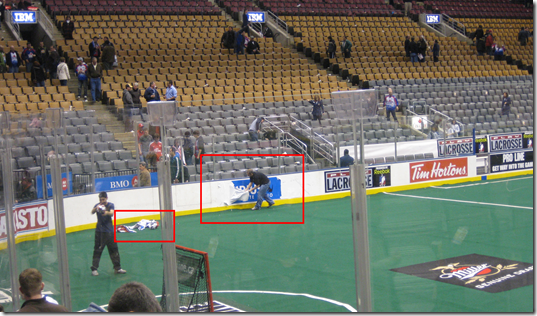 At the end of the Toronto Rock lacrosse game I attended yesterday evening, I was appalled when I came to realize that the advertisements along the boards at the game were disposed after each game. They are literally printing dozens of these giant stickers and peeling them off and trashing them after the game.

I can only assume this was a business decision that was made on the basis that it is cheaper to print and dispose the stickers every game than the alternative options. Can’t they just leave the stickers on the boards instead of disposing them after each game?

I’ve contacted the Toronto Rock and asked for an official explanation on why they made this decision. I’ll follow up in a future “Trash Talk” article if the urban country’s activism is able to make any substantial changes to the Toronto Rock’s operations.

If you disagree with this practice, please call Public Relations Manager Terri Workman @ 416-596-3075 ext. 226 to express your opinion on this matter.