The Bike Path That Almost Was 8

Yesterday I ventured out to the suburbs of Toronto to video record one of my favourite bike paths on Eglinton Ave West in suburban Etobicoke. The 5km+ unobstructed bi-directional bike lanes is a rarity in a city where most unobstructed bike lanes are primarily for recreational use rather than for commuting. 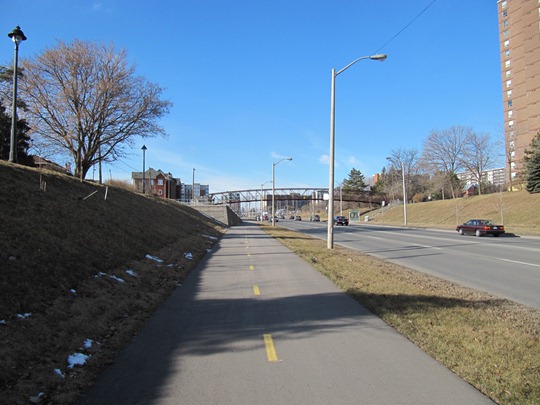 The video shows the entire length of the bike path – from Martin Grove Rd. in the west to Jane St. in the east with playback at 8x the actual speed. You can see in the map below how the bike path ends and there are no bike network connections (ending point is marked by an orange square):

Although I’m happy the city has been investing in bike infrastructure in the ‘burbs, it’s unfortunate that this path doesn’t connect to a network of on-road bike lanes or bicycle routes. It basically ends at a major intersection with many cars traveling at 80km/h or sometimes higher (it’s a 60kmh zone, but many cars travel much faster than 60kmh).

On a positive note, the Eglinton bike path separates pedestrians from cyclists – another rarity in this city. 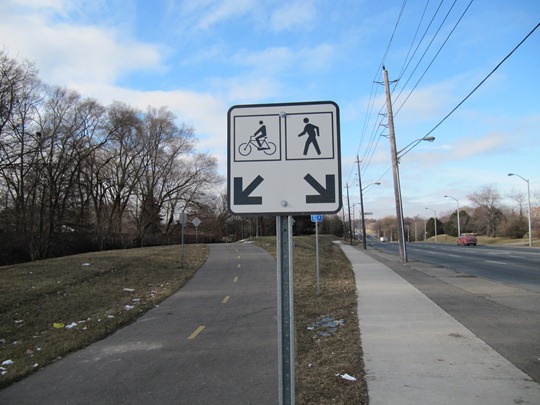 I can’t comment on the volume of cyclists actually using this path because I recorded this on a Saturday morning. But given the fact that I only saw one other cyclist in the 60 minutes it took me to record the video clips, I would guess the path is most likely underutilized during rush hour.

We still have a car culture here in Canada, and people still aren’t willing to give up their cars for several reasons. By building bicycle infrastructure such as this, we are at least removing one of the barriers to getting people on their bikes.

Stay tuned for an upcoming article in the next few days where we will interview a Florida cycling instructor and explore some of the reasons why such few people use their bicycles for transport in North America – even after the infrastructure is put into place.

8 thoughts on “The Bike Path That Almost Was”