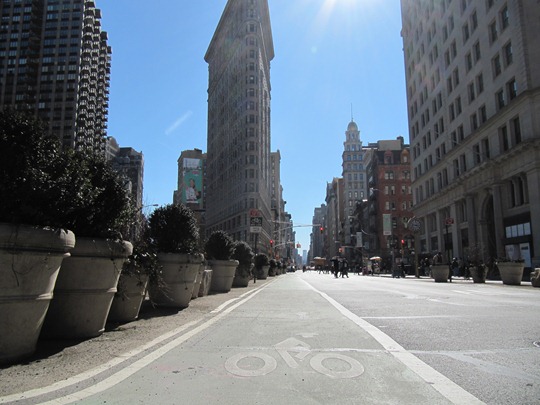 New York City has taken great strides in improving its cycling infrastructure, but it still has its work cut out to change its culture as a pedestrian, subway and car city to becoming a more bike friendly city – and a role model for North America.

In only three years, New York’s Department of Transportation has installed 320KM of new bike lanes in the city – resulting in a grand total of 672KM of on-street bike lanes throughout the city. I saw bike infrastructure from Brooklyn all the way up to the heart of the Bronx – and everything in between.

This is a great accomplishment – and the city is on track to meet its long-term goal of adding 2,880KM of new on-street bike lanes by 2030.

Here in Toronto, we have installed merely 112KM of on-street bike lanes in about 10 years – less than 1/4 of the 495KM our 2001 bike plan called for. In fact, according to the City of Toronto, only 0.7KM of bike lanes were installed in 2009 even though more than 15KM were approved.

I visited New York last weekend with some of my good friends to celebrate my recent marriage. I rented a bike on a sunny Sunday afternoon to experience the new bikeway network to see if it was as amazing as it seemed from a distance.

Overall it is quite impressive to see bike lanes on several major routes throughout New York – including segregated lanes with bike traffic signals on Broadway Ave and 9th avenue (as well as possibly other streets and avenues that I didn’t experience).

But even with some great new infrastructure, New York is still adjusting. I didn’t see the hoards of cyclists that I expected (or hoped) to see – despite the warm sunny weather I was lucky enough to have.

In fact, I typically see more cyclists in Toronto on a cold winter day than I saw in NYC – and we don’t have anything near what Manhattan has for infrastructure.

It’s possible that I didn’t go to the right streets at the right times – although I did wander aimlessly around Manhattan for 4 days straight – so I find it hard to believe that the hoards of cyclists somehow eluded me. Perhaps it’s a bit too soon in the year for cyclists to come out in masses – or perhaps the improvements in infrastructure hasn’t yet convinced people to get on two wheels.

Secondly, pedestrians are still adjusting to the addition of seemingly foreign bike lanes that have been fixated on their streets. In particular I found pedestrians to be quite oblivious to passing cyclists as you can see in my video above.

Many pedestrians use the bike lane as a sidewalk – while others crossed the street directly in front without looking – narrowly avoiding a collision.

This would be understandable on a street with an overflowing sidewalk, but you will see in the video that nearby sidewalks were generally empty while pedestrians walked along the bike lane.

New York is also suffering from the same dilemma that plagues us here in Toronto whereby drivers use non segregated bike lanes to deliver goods, pick up or drop off passengers, short term parking, and many other creative uses.

An article in the Toronto Star yesterday chronicled this phenomenon and its lack of enforcement from the Toronto Police force – something the Toronto Cyclists Union hopes to change.

It felt as though the bike lane had been installed as a recreational tourist attraction to lead tourists to Times Square rather than being a useful safe thoroughfare for cyclists.

Despite these few glitches that I’m sure New York will overcome, the infrastructure that has been added to New York makes a great city an even better city.

New York sets trends for North America – and the world. If any city can sway North America to become a more bike friendly continent, it is definitely New York City.

If New York can keep the momentum going, the cycling infrastructure will transform the Big Apple – and North America will follow.

17 thoughts on “Biking the Big Apple”